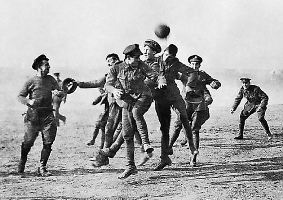 The spontaneous peace that broke out in the trenches of the Western Front is being remembered this Christmas in a series of poignant services at St Patrick’s, Cairncastle, and All Saints’, Craigyhill, Larne.

Focusing on the moment when German troops began singing the carol ‘Silent Night’ in their own language, and Allied troops sang back in English, the services will explore how the message of Christmas brings peace against all the odds.

The first service – taking place on Sunday December 21 at 3.30pm in All Saints’, Linn Road, Craigyhill – will feature traditional carols led by the Magheramorne Silver Band.  These will be interspersed with readings & a short video telling the Christmas story and linking it with the events that took place 100 years ago, when enemy soldiers put down their weapons, meeting in no man’s land, exchanging gifts and even playing football. 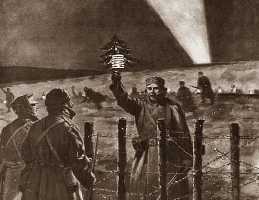 German soldier singing ‘Silent Night’ and holding a Christmas tree and lantern on that poignant Christmas night in 2014.

St Patrick’s, Cairncastle, also marks the event on Sunday morning at its ‘Carols Alive’ service at 11.30am.

At the midnight communion on Christmas Eve [starting at 11.30pm] the centenary will be marked by the lighting of individual candles, recalling the Chinese lanterns and Christmas trees that appeared on the parapets of German trenches.

The speaker at this service will be local Presbyterian minister the Rev Fiona Forbes, and members of all denominations are warmly invited to attend.   Afterwards there is cup of festive cheer with shortbread & mince pies for everyone.

The Rev Roger Thompson, rector of St Patrick’s with All Saints, said: “These services form part of a UK wide initiative sponsored by The Archbishop of Canterbury and Prince William, bringing people together in the true Spirit of Christmas [see http://www.greaterlove.org.uk/silent-night-carols.html]    A collection will be taken in aid of Tearfund’s work with Syrian refugees.”