Stimulating debate over the 10 weeks of The God Enquiry 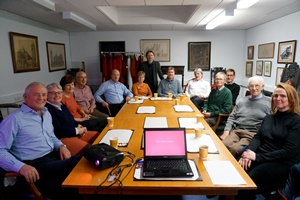 Brendan McCarthy and participants in The God Enquiry hosted by St Anne’s Cathedral.

Stimulating, intriguing, fascinating and enlightening – just some of the words used by participants in The God Enquiry – a 10-week course hosted by St Anne’s Cathedral.

The course, led by Brendan McCarthy, got underway on October 1 and every Wednesday night participants met to explore questions like: Does God Exist? If God Exists, How Might We Know What God Is Like? Is A Christian View Of God Believable?

The course has been developed over a number of years in response to the questions and interests of genuine explorers and is unique in its approach.

Course leader Brendan has a primary degree in divinity as well as Master’s degrees in theology, history and human rights law and a doctorate in Christian Ethics.  He is an ordained Anglican Priest and is currently the Church of England’s national adviser on Medical Ethics and Health and Social Care Policy.

The course was well attended every week by a broad mix of people including those of faith and people of no faith, and each session was conducted in an atmosphere of graciousness and laughter.

One of the participants, Sir Donald Murray, said Brendan posed two fundamental questions: Does God Exist and if he does, how is his nature to be defined?

“His main thesis was that in answering these questions we should use the processes we employ in solving the problems encountered in daily life, viz intuition, experience and reason,” Sir Donald said.

“As regards the belief of the truth of the Christian religion, the lecturer saw in society a spectrum in which at one extreme there is the fundamentalist for whom every word in the Bible is of God and true, and at the other end is the person who regards the resurrection as a non-supernatural event and means the rise of the Christian Church.

“The lecturer did not disclose his point on the spectrum and it was clear from our debate that those present occupied a wide variety of points.”

Other comments from some of those who took part indicate just how successful The God Enquiry was.

“I was delighted to be part of an eclectic mix, gathered at St Anne’s Cathedral for a 10 lecture course led by Dr Brendan McCarthy, exploring the philosophical premise as to whether or not there is room in the universe for God,” said John Burns.

“It was a fascinating journey!  A real ‘mind stretcher’. And it soon became apparent that Brendan has a deep well of ‘reason, intuition and experience’ from which to draw.

“Not only did I enjoy Brendan’s structured delivery, but also the interesting level of debate which ensued. Indeed, so much that I would probably enrol to do the course again. Thank you Brendan for helping me put the spotlight on where I am on the spectrum!”

Ciaran Mulgrew commented: “The questions ‘why are we here, and what responsibilities do we have to one another?’ are too important not to be explored in the company of others whose views do not mirror your own.

“The God Inquiry is an excellent course, it makes you think about what you believe and why you believe it. Before you make up your mind, you have to open it and Brendan goes to great lengths to create an open and safe environment in which people, both theist and atheist, can explore their beliefs.”

“I found the God Enquiry to be a stimulating and intriguing course,” said Jenny Ebbage. “Brendan led a diverse group of individuals through a well thought out series of questions. It was very thought provoking and the interaction from the group was essential to bring out the ideas and themes in a meaningful way.

Gary McElvogue said he found The God Enquiry to be ‘incredibly interesting, enlightening and invigorating.’

“I whole-heartedly recommend this course and Brendan’s book to anyone contemplating God and the universe,” he said.