Thought-provoking drama at the Christmas Event 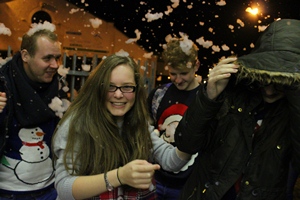 A snowy greeting as young people arrive at the Christmas Event in Antrim!

More than 100 young people and leaders had a fantastic night of festive fun at the Engage Connor Youth Christmas Event in Antrim on December 13.

They came from all over the diocese for an evening of games, worship, drama, prayer and, of course, pizza. Our photo album (below) will give you a flavour of the evening. All pictures by Amy Webb.

The icing on the cake (or should be the ice on the footpath?!) was a constant flurry of snow as young people arrived at Antrim Parish Halls, courtesy of a snow machine organised by the Engage Connor Youth team who wanted to make sure the atmosphere was just right!

Adding to the festive scene was the wide selection Christmas jumpers worn by the young people and their leaders – complete with flashing lights in some cases!! 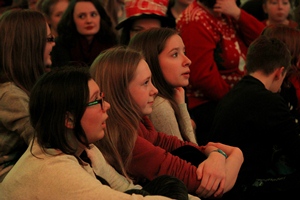 Enthralled by the drama at the Chrismas Event.

The evening kicked off with games including a giant pass the parcel, musical statues, and horses, knights and cavaliers, and all the games were full of energy and fun.

The Event’s Bible element took the form of three dramatic monologues (‘Play it By Ear’ Drama Productions). This involved three actors playing the part of Mary, a shepherd and Simeon, before the chair of Engage Connor Youth, the Rev Peter Ferguson, lead an epilogue on the theme of HOPE.

“You could hear a pin drop during the dramas,” Peter said. “They were very powerful and meaningful.”

Music was provided by Mark Ferguson and his band.

Peter is soon to leave Connor Diocese to take up his incumbency in Derg and Termonamongan, Diocese of Derry, and Engage Connor Youth be chaired by Zara Genoe and Sharon Hamill.

Peter leaves a strong youth sector in Connor Diocese, and we thank him for all he has done and wish him every blessing in his new role.