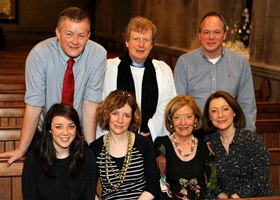 The former rector of Magheragall Parish Church, Canon Alex Cheevers, who died in August, was honoured in the church on Sunday December 21.

At the service of Nine Lessons and Carols that evening, a special offering was held in memory of Canon Cheevers, with the money raised going to support the research work of Professor MF McMullan of Haematology at Queens’s University, Belfast.

This charity was selected by Canon Cheevers’ widow Maureen, who joined the service with her family.  Her daughters Pauline and Joyce and their respective husbands Paul Connolly and Robin Mack, read at the service and her granddaughter Emma sang a solo – In the Bleak Midwinter.

Canon Cheevers was rector of Magheragall Parish from 1991 until his retirement in 2004. 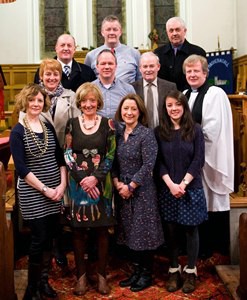 The church has compiled articles written about Canon Cheevers, and his daughter produced a booklet in his memory which was given out to everyone who attended the service.

“In the parish the news of Alex’s death was met with great sadness and heartfelt sympathy for Maureen and the family,” said the rector of Magheragall Parish, the Rev Nicholas Dark.

In his foreword in the booklet, Nicholas encouraged the congregation to support the special offering. “Professor McMullan was Alex’s Consultant. Professor McMullan is responsible for writing the protocol for the management of Polycythemia Ruba Vera in the UK,” Nicholas explained.

“Through research they have identified the gene, called the Jak2 gene, which is responsible for the disease process involved in Polycethemia Ruba Vera. Further research is required to determine if the fault in the gene can be reversed or slowed down. This has the potential to greatly improve the quality of life of patients with this disease.”

Nicholas said the parish was honoured that Maureen and her family were able to join it for this service of lessons and carols.

“Alex with his truly pastoral heart passed on something of inestimable value to the parishioners of Magheragall, the love of Jesus,”  he said. 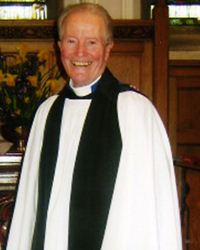 Canon Cheevers also had a great interest in the two world wars. He regularly led groups of local people on guided tours of the battlefields and war cemeteries of Europe.

The service was followed by seasonal refreshments in the church hall. At time of writing, £1,090 had been raised for the research work at Queen’s selected by Maureen.