Remembering the victims of the Asian Tsunami of 2004 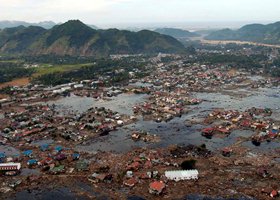 Devastation caused by the tsunami in the Indian Ocean on Boxing Day 20014. The disaster will be remembered in St Anne’s Cathedral on December 26.

The victims of the Boxing Day Tsunami in 2004 will be remembered this St Stephen’s Day (Boxing Day) in St Anne’s Cathedral, Belfast.

An estimated 300,000 people died when a massive earthquake caused a tsunami around the Indian Ocean. Many more lives were devastated and communities destroyed.

The Very Rev Houston McKelvey, who was Dean of Belfast at the time, and the Canons of the Cathedral brought out the Black Santa barrel once again – the Dean had just finished his Black Santa Sit-out on Christmas Eve – and the people of Belfast and beyond gave a huge amount of money for the relief work.

The Cathedral will be open just for one hour on Friday, December 26, from 8am until 9am.  As on every weekday of the year, at 8.10am Morning Prayer will be read in the Chapel of the Holy Spirit and after a five minute break, Holy Communion is to be celebrated in the Chapel of Unity at 8.30am.  The entire Cathedral will be open during the hour for people to come and go, say their own prayers, or light a candle.

Canon Douglas Goddard, who for many years served in the Port of Belfast as a Mission to Seafarers Chaplain, and the Dean of Belfast, the Very Rev John Mann, will conduct the services and have special prayers for all who were affected by the disaster of St Stephen’s Day 2004.

Dean Mann said: “Why not begin your Boxing Day by driving to the Cathedral at some time during that hour, and either attend one of the services, or spend a few minutes on your own in prayer?  You may wish to see the Haiti exhibition too that is in the ambulatory.  The rebuilding of that community after disaster is recorded in photographs that will be there until the fifth anniversary in January 2015.”