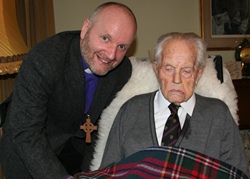 Billy, who has been recognised as the oldest gentleman living in Northern Ireland by the website ‘Oldest in Britain,’ is celebrating today with family and friends.

Two of his sons, Denis and Desmond and their families are by his side – Billy still lives in the home he set up with his late wife Henriette when they married in 1938 – and early this morning Billy had a call from his third son Colin ringing from New Mexico, USA. 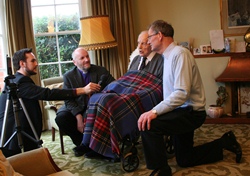 Billy Noble is interviewed on his 106th birthday. With him are Bishop Alan and Billy’s son Denis.

Among the many well-wishers was the Bishop of Connor, the Rt Rev Alan Abernethy, and Billy’s rector at St Patrick’s, the Rev Canon Nigel Baylor was also planning to stop by.

Billy was interviewed, filmed and photographed by local media and was scheduled to feature on BBC Radio Ulster’s Evening Extra programme later in the day.

Despite all the attention, Billy, who received a card from Her Majesty the Queen for this milestone birthday, enjoyed chatting with Bishop Alan who prayed with him and the family before leaving Billy to enjoy his birthday cake. 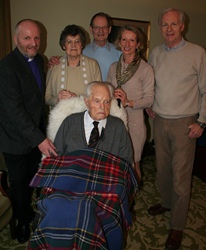 Billy Noble celebrates his 106th birthday with Bishop Alan Abernethy and members of his family.

Billy spoke about his long and eventful life in an interview in Connor Connections in June 2014, and in the summer visited St Anne’s Cathedral, where he had once been a choirboy, to hear today’s young choristers rehearse.