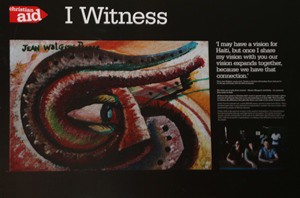 Prayers were said for Haiti in St Anne’s Cathedral on Monday January 12 – five years to the day after an earthquake devastated the country with the loss of more than 220,000 lives.

St Anne’s is currently hosting Christian Aid’s I Witness exhibition, which focuses on the rebuilding of lives in Haiti in the wake of the earthquake.

In a statement marking the anniversary, Christian Aid said the development progress made in Haiti is at risk of being overshadowed by the needs that have yet to be addressed.

Over the past five years Christian Aid has worked to support the country’s reconstruction, reaching 180,000 people affected by the disaster.

Long-term reconstruction efforts include training masons to safely repair houses and building over 550 earthquake-resistant homes in affected communities to allow families to resettle in the countryside and escape the difficult conditions in the capital, Port-au-Prince. Christian Aid partners also helped over 32,000 people earn a living by providing seeds, tools and livestock for farmers, and giving loans and business training to traders.

In order to lessen the impact of future emergencies, 35,000 people were trained in how to prepare for and respond to natural disasters.

“Although much has been achieved, the international community must not become complacent about the pace of progress or the outstanding needs,” says Christian Aid Country manager Prospery Raymond, who was in Port-au-Prince at the time of the earthquake.

“The fact is, many Haitians continue to live in a desperate situation. The majority are trapped in poverty, with little access to basic services. More than 85,000 are still displaced, living in temporary camps. The country needs investment to build around 30,000 new houses a year for the next decade.”

Meanwhile, Christian Aid say there are still many barriers to long-term development, including past and present political instability, environmental degradation, vulnerability to natural disasters and weak governance. At a time when many institutional donors and NGOs have reduced their funding for Haiti’s development, the country urgently needs more investment in health, education, agriculture, environment, infrastructure, security and tourism.

Mr Raymond continues: “Tourism has evolved a lot in Haiti. More hotels have been built in the past few years and many Haitians who used to live overseas are returning and are investing in the country, which is a good sign. I’d encourage people to come and visit Haiti. It’s a beautiful island and a boost in tourism would fuel our development.”

He adds: “Haitians have made remarkable strides since January 2010. While I am optimistic about our future, this fifth anniversary comes at a time of political unrest. Recent weeks have seen public demonstrations over the failure of the administration to hold long-anticipated elections. The situation is tense. I hope our leaders will resolve the political crisis and find the best solution for the Haitian people. Otherwise, this situation could undo all the good work that has been achieved over the last five years.”