Local charity, Tools for Solidarity, is again appealing for the support of Connor parishes in collecting old or unused sewing machines which it will send to Africa.

The charity has been working in Belfast for 30 years.  It works with local, international and supported volunteers, collecting old hand tools and sewing machines which are refurbished and sent  to centres in Tanzania and Uganda.

A spokesperson for the charity said: “These refurbished tools and sewing machines help to improve the lives of the local people and their communities in the areas we serve in Africa.  The current focus is on Tanzania and Uganda and these are amongst the poorest countries in the world.” 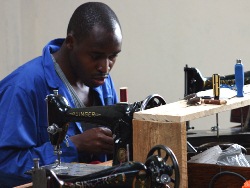 A refurbished sewing machine can have a gib impact on someone’s live in Africa’s poorest communities.

Tools for Solidarity is running a project to collect 300 old/unused sewing machines in the next three months as well as old hand tools.

It asks parishioners to leave off the machines after services on a Sunday and the charity will collect them either on the day itself or on the Monday following.

Items can also be left at the charity’s office at 55a Sunnyside Street off the Ormeau Road (postcode BT7 3EX) or collection can be arranged. Please telephone 028 9542 5972.

The spokesperson added: “The benefit of the project to some of the poorest people in the world cannot be overstated.”