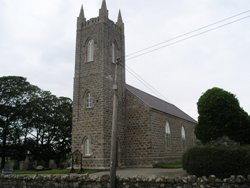 Billy Parish in Bushmills celebrates its 200th anniversary this year. The parish has existed since the Norman Conquest, but the current church was built in 1815 and the ruins of the former church can be seen in the old graveyard.

The earliest record of Billy goes back to 1305 with the taxation of Pope Nicholas IV when the parish was valued at £36, a high valuation suggesting the parish was large and prosperous.

The list of rectors and vicars can be traced to 1428 when John Mieltim resided in Billy.  In former times Billy was one of the largest parishes in Co Antrim covering the areas of Dunseverick, Ballintoy and Rathlin before those parishes were carved out.

Today Billy’s claim to fame is that the parish includes Northern Ireland’s only World Heritage Site, the Giants Causeway, as well as 29 other townlands.

The parish church is typical of its age, three bays long with y-traceried windows.  The bell tower is a prominent landmark with its pinnacles and battlements.  The chancel and sanctuary were added in 1890 and have three fine stained glass windows by Michael Healy, the pioneering Irish artist whose work is highly regarded.

Several events are planned to mark the 200th year in the life of the parish church, and the first is a special service on Mothering Sunday (March 15) when the Bishop of Connor, the Rt Rev Alan Abernethy, will celebrate with the congregation. The service begins at 11am and all welcome.

A wedding dress festival is planned for September to coincide with the European Heritage Open weekend (September 12-13), and the year will end with a Christmas tree festival in December.

The church has just been redecorated internally, and all are very welcome to come and visit.  Worship is at 10.30am on Sundays.