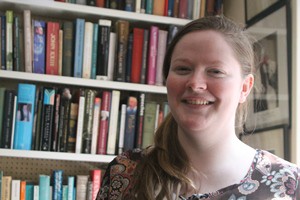 Gemma Kernohan with some the books she helped catalogue during her internship in St Anne’s last summer.

Last summer, two interns from Queen’s University spent several weeks working in the library cataloguing every book in the collection.

Their work can now be downloaded from the Cathedral website, allowing anyone searching for an old or rare theological book to check the library’s collection with just the click of a mouse.

The book can then be easily located in the library which is open to visitors daily, but it is advisable to ring ahead is it is sometimes booked by groups.

When the Queen’s interns arrived in July, they found the books had already been placed in categories, and they set about listing them on a spreadsheet including as much information as possible – the author, the title and the ISBN number, although many of the books are much too old to have one.

Intern Gemma Kernohan said she had found most of the books to be in very good condition. “This library is a great resource, especially for theology students, but there are plenty of general books which the public would find interesting. It is a very comfortable library, people should definitely come in and use it,” Gemma said. 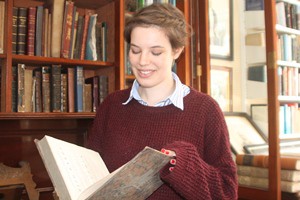 Intern Elinor Rowing sorted out some of the oldest and most fragile books in the Cathedral’s collection.

Elinor Rowing found her time in the library to be both informative and entertaining. “Rare books can be absolutely stunning, and can turn up some interesting stuff. They can be funny too, especially spellings and old surnames. A portrait in a book on Irish music and bards, dated 1779, had us all in hysterics!” she said.

Elinor spent time painstakingly cataloguing some fragile books stored behind glass in the library. The oldest book she found dated back to the early 1500s.

“This library contains some very rare books, it is a time capsule of the period,” Elinor said.

The library was opened in St Anne’s Cathedral in February 2013, and the official opening was attended by the Archbishop of Armagh, the Most Rev Dr Richard Clarke, and Mr John Killen, MA, Librarian at the Linen Hall Library, Belfast. 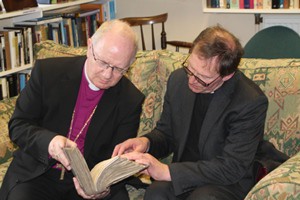 February 2013 – Dean John Mann and Archbishop Richard Clarke browse one of the old books at the official opening of the new library.

At the opening, the Dean of Belfast expressed thanks to Paul Gilmore, who was on placement in the Cathedral for six months and whose efforts had resulted in the establishment of the library.

It is intended for the use of the clergy and lay people of the dioceses of Down and Dromore and Connor as well as anyone who wishes to access the works of reference that the library holds.

These include a number of volumes that have been in the possession of the Cathedral for a long time as well as the remnants of an old diocesan library. To this core of books have been added donations from clergy and lay members of the two dioceses and from other sources.