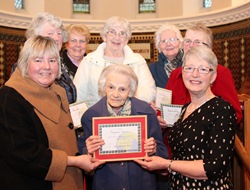 A presentation to Mrs Margaret Adams for 70 years service as Eglantine MU celebrates its 70th anniversary.

The service was conducted by a former rector of Eglantine, Canon William Bell, and a former Branch Leader, Mrs Norma Bell was the guest speaker.

After the service, guests from branches within Lisburn Area joined Eglantine MU for afternoon tea in the parish hall. 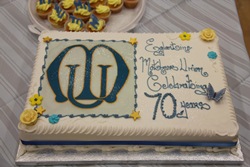 The Branch donated large print hymn books as a gift to the church to mark the occasion.