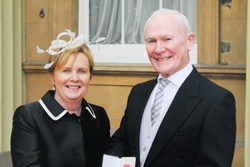 The Rev Campbell Dixon MBE at Buckingham Palace with his wife Jacqui.

The Rev Campbell Dixon, a member of the clergy team at Belfast Cathedral,  was at Buckingham Palace on January 30 to receive his MBE from HRH Prince Charles.

Campbell has been working in St Anne’s Cathedral since 2011, and was previously District Policing Partnership (DPP) Manager for Newtownabbey Borough Council. He was awarded the MBE for services to the community in Newtownabbey in the Queen’s Birthday Honours list last summer.

Campbell was accompanied to the Investiture by his wife Jacqui, and was one of around 85 people to receive a variety of awards in the Palace that day.

He had the opportunity to talk with Prince Charles as he was presented with his Honour. “He was very interested in political progress in Northern Ireland and I told him things were greatly improved,” said Campbell. “He was very pleasant and made a point of speaking to each recipient.”

He added that it had been a memorable day. “The Palace is fantastic, and gave me an appetite to go back some day and take the tour. It is a splendid place, fit for a Queen!”