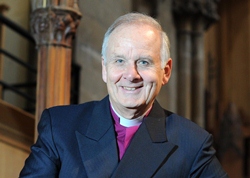 The Archbishop of Wales, the Most Rev Barry Morgan, will preach in St Anne’s Cathedral on February 22.

The Archbishop of Wales, the Most Rev Barry Morgan, will be the guest preacher at the 11am service in Belfast Cathedral on Sunday February 22.

The Archbishop has accepted the invitation of the Bishop of Connor, the Rt Rev Alan Abernethy, to preach in St Anne’s, and he will speak on a subject close to his heart, the work of the Welsh poet RS Thomas.

Barry Morgan has been Bishop of Llandaff since 1999 and Archbishop of Wales since 2003, having previously served as Bishop of Bangor 1993-99.

Born in the village of Gwaun-Cae-Gurwen, near Neath in South Wales, he read history at London, Theology at Cambridge and trained for the ministry at Wescott House, Cambridge. He studied for a doctorate whilst a university lecturer.

He has worked in a range of ministerial contexts – in parish ministry, as a university and theological college lecturer and university chaplain, and as an archdeacon, director of ordinands and as a continuing ministerial education officer.

He has served on the Central Committee of the World Council of Churches and on the Primates’ Standing Committee of the Anglican Communion. He was a member of the Lambeth Commission which produced the Windsor Report 2004.

Archbishop Morgan has published a number of articles and books, his latest being a study of the work of RS Thomas ‘Strangely Orthodox’.

He is Pro-Chancellor of the University of Wales, a fellow of Cardiff University, Bangor, Swansea, Carmarthen, Lampeter and Cardiff Metropolitan University and until recently, was President of the Welsh Centre for International Affairs. The Archbishop has also chaired an inquiry on behalf of Shelter Cymru on homelessness in Wales. He is a fellow of the Learned Society of Wales.

Bishop Abernethy said: “There are very close links between the Church of Ireland and the Church of Wales. I have invited Archbishop Morgan to preach in St Anne’s as a dear friend, and also as an expert on the subject of RS Thomas.

“We are looking forward to showing him some Irish hospitality.”

The Eucharist service in St Anne’s gets underway at 11am on Sunday February 22 and visitors will be most welcome.