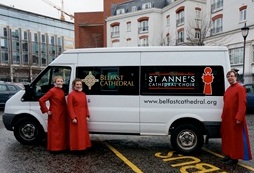 Hannah, Megan and Master of the Choristers David Stevens with the choir minibuses.

If the people of Belfast City and beyond hadn’t realised that St Anne’s Cathedral has a host of vibrant young choristers in its choirs, then they will know about it now.

For the Cathedral’s two minibuses, which for the past year have been used almost daily to bring girls and boys from across the city to sing in the Cathedral, are now well and truly branded!

The two buses are emblazoned with the Cathedral’s new logo, the declaration that this is the St Anne’s Cathedral Choir, and the cathedral website address.

The Dean of Belfast, the Very Rev John Mann, said: “There never seemed to be time to put the buses out of commission for a day or two, get them thoroughly washed and have the transfers applied, but now it has been done and they look resplendent with their new logos and script.

“One of the minibuses was provided by the Church of Ireland Priorities Fund and St Anne’s is deeply grateful for this gift.  It is being well used, and children are brought together from across the community to sing in the beautiful Belfast Cathedral.”

The Dean added that St Anne’s has “played such a part over the years as a meeting place for those who are working together for the healing of the city and province, as a place of reconciliation and hope and celebration.”

The Cathedral Choir minibuses, as modelled by choristers Hannah, Megan and Master of the Choristers David Stevens.

Secondary age girls come to St Anne’s on a Monday and Wednesday, primary age boys on a Tuesday (and soon on a Thursday too) and junior girls on a Friday.  Afternoons are busy with theory of music being taught as well as practical vocal tuition, both individually and in the sections of the choir of which the boys and girls are a part.

David Stevens, Master of the Choristers, conducts, and Catherine Harper provides individual tuition – both are also minibus drivers! Therese Woodfield, Assistant Master of the Choristers also conducts and all three teach singing in schools in north Belfast which are taking part in the Belfast Cathedral Choir School Project.  Therese has begun offering A-level music tuition at the Cathedral after school as well.

Dean Mann added: “With a mobile choir we would welcome the opportunity to sing in other churches, especially in the two dioceses of Connor and Down and Dromore, for Evensong or other special occasions.”

There would be a small charge. If parishes are interested in booking part of the choir, please contact David Stevens on david@belfastcathedral.org