Cheevers’ family thanks for research support 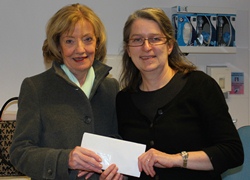 The family of the late Canon Alex Cheevers have expressed their thanks to everyone who helped raise funds to support the research work of Professor MF McMullan of Haematology at Queens’s University, Belfast.

Canon Cheevers was rector of Magheragall Parish from 1991 until his retirement in 2004.

At a service of Nine Lessons and Carols in Magheragall on December 21, a special offering was held in memory of Canon Cheevers,

The funds raised at this service, added to donations in lieu of flowers in memory of Canon Cheevers, meant that the family was able Prof McMullan, who was Canon Cheevers’ consultant, with a cheque of £5,500 to support research into bone marrow disease and its management.