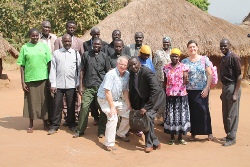 Members of the Connor Yei team after preaching in Longamere village in South Sudan in 2013. The team benefited from a Mission Support Fund grant.

Applications are invited from anyone in a parish in Connor Diocese seeking financial support from Connor Mission Support Fund for mission work.

The Fund is administered by Connor Council for Mission which is keen to deepen a sense of mission throughout all parishes within the diocese. It was first launched in 2008.

The Council is aware that many individuals would like to get involved but enthusiasm can be dampened by a lack of resources to complete the task. The Connor Mission Support Fund can provide assistance to a number of people wanting to be more fully involved both at home and overseas.

In the past, the Mission Support Fund has helped individuals and teams including the Connor team which visited Yei, South Sudan, in 2013, Claire Mulligan, Holy Trinity Woodburn, who led a Fields of Life School Camp in Uganda in 2012, Grace Park from Magheragall who spent a year working in Cambodia and Daniel Gill, from Monkstown Parish who was supported in his training to be a pilot with the Mission Aviation Federation.