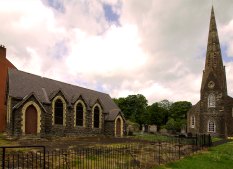 The old school house in the grounds of St Patrick’s Ballymoney before it was refurbished.

The Old Church School in the grounds of St Patrick’s Parish Church, Ballymoney, has been given a new lease of life.

The building, which dates from 1874, has been completely restored and renovated after lying derelict for four decades.

On St Patrick’s Day, March 17, the Bishop of Connor the Rt Rev Alan Abernethy will reopen and rededicate the schoolhouse when he visits at 11.30am.

The schoolhouse was built by Robert Young of Market Street for the sum of £870, and was run by the church as a school. During the war it was used as a billet by the army, and was closed as a school under the Education Act in the 1940s.

St Patrick’s continued to use it as a parish hall until 1973 when the new Parish Centre was opened.

After that the schoolhouse fell into a state of disrepair. It was on the ‘Buildings at Risk’ register for many years and is part of Ballymoney’s Conservation Area, but despite requests by the church it was never listed by the Department of the Environment.

The refurbishment to bring to school back into use for both church and community comes at a much higher cost than its 1874 price tag of £870.

The project received 77 per cent funding from the Heritage Lottery Fund – amounting to £542,500, with the parish tasked with raising the remaining £160,000 needed through other grants and its own fundraising.

Mr George Field, Honorary Secretary, said that £140,000 of this has already been raised.

The building was previously owned by the Diocesan Board of Education until the parish bought it in 1992. It is now vested in the RCB.

Although the building has been completely refurbished to make it fit for multi-purpose use in the 21st century, it does retain some features which link it to its past. A stipulation of the Heritage Lottery Fund grant, for example, was that the original panelling in the main hall be replicated in the new hall, and traditional, not double glazed windows, be installed.

As well as the big hall, the schoolhouse boasts a kitchen, stores, office and modern toilet. As part of the renovations, a small extension was added.

George said the building will be used by the Ballymoney Parish CAP (Christians Against Poverty) group, and other community as well as church based organisations.

“We conducted a survey before making our application for funding to see what there was in the town and what people thought was needed,” George said. He anticipates the hall will be extensively used by groups working with the elderly, with young mothers, children and other community organisations.

“It was felt that St Patrick’s Day would be appropriate for the reopening and rededication of the old schoolhouse of St Patrick’s Church,” George added.

Anyone interested in the history of this old building is welcome to attend a talk in the schoolhouse beginning at 7.30pm on Wednesday March 18 by local historian Alec Blair.