Poets are topic of Archbishop’s talks at Quiet Morning 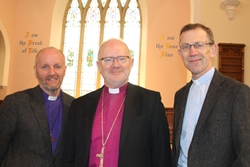 Guest speaker Archbishop Richard Clarke, centre, at the Quiet Morning in Glenavy, with Bishop Alan Abernethy, left, and the rector of Glenavy, the Rev John Rutter.

The Bishop of Connor, the Rt Rev Alan Abernethy, hosted a Quiet Morning for clergy of the diocese in St Aidan’s Parish Church, Glenavy, on Thursday March 5.

Almost 70 clergy attended the event, at which the guest speaker was the Archbishop of Armagh and All Ireland Primate, the Most Rev Dr Richard Clarke. (See our photo album, below).

Welcoming everyone, Bishop Alan said: “I am conscious of the busyness and relentlessness of parish life, and I thank you for coming here today.”

Introducing Archbishop Clarke, he said that throughout his ministry he had enjoyed the Archbishop’s agile mind, compassion, warm heart, and joyous nature.

The Quiet Morning began with refreshments, followed by a service of Morning Prayer led by the rector of Glenavy the Rev John Rutter.

Archbishop Clarke delivered two talks about two poets – both Welsh, both Anglican clergy in country parishes, whose births were separated by three centuries. He spoke first about George Herbert, author of The Country Parson, a poet of the 17th century, and his second talk was on the 20th century poet RS Thomas.

Archbishop Clarke was thanked for his insight into these two poets by the Dean of Belfast, the Very Rev John Mann.

An enjoyable lunch was served in the parish hall of St John’s, Crumlin, as the hall at St Aidan’s is being renovated, and afterwards the Archdeacon of Dalriada, the Ven Stephen Forde, expressed thanks to the ladies of the parish for the lovely meal.