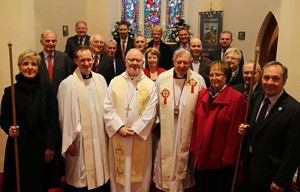 A service to celebrate the 250th anniversary of St Patrick’s, Broughshane, on Sunday March 1 was conducted by the Rev Adrian Halligan, curate, and the rector, the Very Rev JFA Bond, Dean of Connor.

The Epistle was read by the Mayor of Ballymena, Councillor Mrs Audrey Wales MBE, and the Gospel by Mr Ernie Johnston.

The celebrant and preacher was the Archbishop of Armagh and Primate of All-Ireland, the Most Rev Dr Richard Clarke, who also spoke to the children.

The Praise was led by Mrs Elizabeth Ferguson, organist, and the choir, and included a special anniversary hymn.