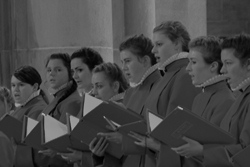 The choristers of St Anne’s Cathedral, Belfast, are embarking on a major fundraising drive to raise money for a Choir Tour in France planned for the summer.

The first big fundraising event will be a Cake and Gift Sale in the Cathedral on Mothering Sunday, March 15. Cakes and gifts including homemade jams and flowerpots will be on sale after the Sung Eucharist Service at 11am and again after the All Age Service being held at 1pm.

Other activities planned include a car wash and sponsored participation in the Belfast Marathon – the choristers are likely to turn a few heads among marathon spectators when they do the marathon walk in their cassocks!

The French tour will give the choristers the opportunity to sing for different audiences in different venues, and will boost the profile of St Anne’s at home and in France.

A group including members of the Girls’ Choir, Lay Clerks and Sopranos will leave Belfast on July 31, and the first concerts will be staged in the south east of France. The tour begins with a performance at a festival in Poligny celebrating the 600th anniversary of the church there. The choir then moves to Orgelet, where they will sing to the accompaniment of the church’s ancient organ, which dates back to 1613.

Their third concert in the area has provisionally been arranged for the old Abbey in St-Antoine-l’Abbaye.

The choir will then move to Paris for a series of concerts which are still being finalised. Over their 10 days in France, the choir members will have the opportunity to take in the sights of both Paris and surrounding areas.

Master of the Choristers David Stevens said that this would be the first tour outside of the UK for a Choir from St Anne’s in many years.

“Cathedrals like to do tours of this kind,” Dave said. “It is good for the choristers, especially the children, to sing in places other than the Cathedral and to sing in other cultures. The tour will raise the profile of St Anne’s both at home and in France.

“The girls, lay clerks and sopranos are really looking forward to it.”

The Dean of Belfast, the Very Rev John Mann, said there were many benefits to a Choir Tour of this kind. “Exposure to a different environment to the Cathedral, extended time living and working together as a unit, publicity and, not insignificantly, such a venture excites people and so gives everyone a lift and the encouragement that goes with it,” the Dean said.

Further details on the Choir’s fundraising drive will be posted on the Cathedral website www.belfastcathedral.org as events are organised, but anyone who wishes to make a donation can send it to the Bursar, St Anne’s Cathedral, Donegall Street, Belfast, BT1 2HB or download a donation form.