Service of institution in Derryvolgie 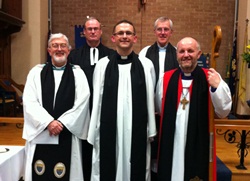 The Rev Stephen McElhinney, centre, with Bishop Alan Abernethy, right, and clergy who attended his institution.

A Service of the Institution of the Rev Stephen McElhinney as incumbent of Derryvolgie Parish took place at St Columba’s, Derryvolgie, on February 25.

Stephen has been Priest-in-Charge of Derryvolgie under the licence of the Bishop of Connor since September 2011. After a change in the status of the Parish and subsequent Board of Nomination, Stephen was appointed and instituted as rector.

The Bishop, the Rt Rev Alan Abernethy, was present at the service along with other representatives of Connor Diocese.

Stephen, who is married to Cathy, was born in Manchester, but moved to Lurgan in 1973. He graduated in Optometry from Aston University and after two years working in the north of England he returned to Ireland. 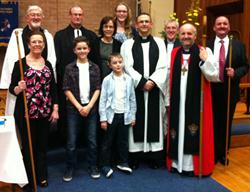 Family and clergy at the institution of the Rev Stephen McElhinney in Derryvolgie.

Stephen was ordained in Christ Church Cathedral Dublin in June 2005 – this was the first time a son was ordained in the Church or Ireland whose mother was also an ordained Church of Ireland minister – the Rev Liz McElhinney was ordained in 1997 and was curate at Magheralin Parish (1997–2001) and rector of Calry Parish, Sligo (2001–2007).

Following his ordination Stephen served as a member of the staff team of Kill O’ the Grange Parish Church, Dublin, moving in May 2008 to Drumglass Parish, Dungannon, before his appointment as Priest-in Charge of Derryvolgie.