Comic Relief Thought for the Day from the Rev Elizabeth Hanna 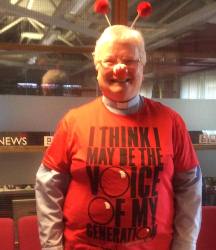 The Rev Elizabeth Hanna, rector of St Nicholas Parish Church, Lisburn Road, Belfast, reflected on the origins of Comic Relief when she delivered Thought for the Day on BBC Radio Ulster on Friday March 13.

With a day of laughter and tears stretching ahead as people donate to Comic Relief in order to improve life for those in difficult situations both at home and in Africa, Elizabeth acknowledged that the sense of need can sometimes be overwhelming.

And she recounted a story about starfish, and how everyone can make a difference to someone.

Elizabeth will feature on Thought for the Day every Friday morning during March. You can read her Comic Relief reflection in full below.

Some of you might remember Christmas Day 1985 when Richard Curtis and Jane Tewson came up with the idea of using comedy to raise money for charity.  Comic Relief was launched live on the BBC from the Safawa refugee camp in Sudan.   It was a response to the African famine.

As a development from Comic Relief, Red Nose Day began three years later.  Hundreds of millions of pounds have been collected, through all sorts of people doing something funny to help people who are in need.

Raising money can be as simple as me coming into the studio this morning with a red nose and wearing my now rather ancient original Sports Relief socks … or it might be as complicated as teams trekking across the Sahara or climbing Mount Kilimanjaro. 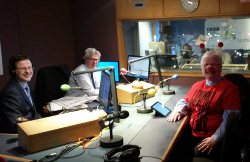 Rev Elizabeth Hanna with presenters in the BBC Radio Ulster Studio on the morning of Comic Relief Day, March 13.

Across the country today many of you will play your part in giving time and money.  Using the vehicle of comedy, and sporting a red nose, typical of the clown, we can all do something to make a difference to people who are in need.  On the Comic Relief programme tonight you’ll see many examples of transforming work that is being done to support others.

Comic Relief is a reminder that many people barely survive in a world where poverty is common and hunger a daily reality.

Giving to charity is, of course, something that is taught in all religious traditions … we have a responsibility to take care of the weak and the vulnerable.

Jesus commented on an experience he had in the temple area … rich people were making a show of how much money they donated while a poor woman put into the collection all she had.  He said, “Truly I tell you, this poor widow has put in more than all of them…”

We have a shared desire to make a difference but sometimes the sense of need can overwhelm us.

That reminds me of the story of a man on a hot sandy shoreline who spent his morning throwing stranded starfish back into the sea.

He was approached by a critic who reminded him that there were miles of beach and thousands of starfish … what possible difference could he make?

He simply picked up another starfish, threw it back into the ocean and replied, “it made a difference for that one.”