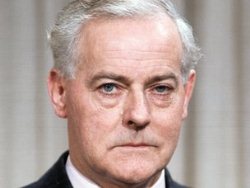 Baron Molyneaux of Killead, who was 94, was born into a farming family in the village of Killead, and had been a parishioner of St Catherine’s since childhood.

Paying tribute to Lord Molyneaux on hearing news of his death, the Bishop of Connor, the Rt Rev Alan Abernethy, described him as ‘a man of devotion and loyal service.’

“Weekly worship and choir membership were integral to his life, the hallmarks of someone who made a faithful contribution to his local as well as the wider community,” Bishop Alan said.

“I wish to express gratitude for his service to God and the Church and to acknowledge the distinctive part he played in political life here as well as in his role in the RAF during the Second World War and the liberation of Belsen.”

The funeral service was private and was attended by family and invited guests only. The Bishop of Connor was among the mourners.

The service was conducted by the rector of Killead, the Rev William Orr, who said of the late Lord Molyneaux:  “Jim was a gentleman in every area if his life and it didn’t matter if you were a fellow MP or a local person from Killead he never made a difference with you.

“He loved Jesus first, his family second, his church third and his country fourth. No matter where he was in the country he endeavoured to be home so that he could sing in the church choir which he did for 80 years. He often quoted words from Harold Macmillan which he used to describe himself – “Calm quiet deliberation disentangles every knot.”