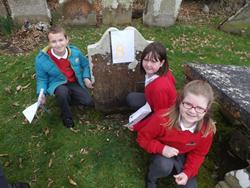 The children listened to a presentation about the amazing story of the church, built in 1815, and then spent time exploring as they filled in a quiz.

Among the many historic treasures they found were the fabulous Spanish Chestnut tree – Cairncastle’s own ‘Whomping Willow.’  According to local folkore, this grew out of the grave of a sailor who was drowned in a shipwreck from the Spanish Armada in 1588.  If true that makes this the oldest tree in Ireland with a known planting date! 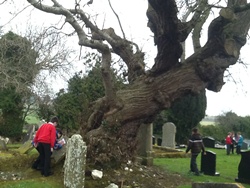 Other treasures included the stained glass window depicting St Patrick tending sheep on Slemish Mountain, the ancient Jonathan Swift font, linked to the writer of Gulliver’s Travels who was a minister locally in 1696.

The children also found the gravestone of local woman Margaret Bailie, who died in 1881 at the amazing age of 111!  Something of a local celebrity, an early photograph of her still survives, together with an account of her still tending and milking her cattle even at such a great age! 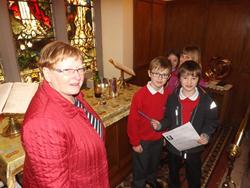 After refreshments the children took part in a special St Patrick’s Day service, attended by parents and parishioners. The rector, the Rev Roger Thompson, told them the story of St Patrick, and how God still speaks to us today through the Holy Spirit.

The children sang four songs from their recent appearance at the Peace Proms event in the Odyssey, including ‘Happy’ by Pharrell Williams and ‘Let it go’ from the ‘Frozen’ movie, and champion Irish dancer Abbie Best performed two reels, including one appropriately named ‘St Patrick’s Day.’

Roger said: “It has been a really fabulous day for us at St Patrick’s… it was great to see the children enjoying exploring our church, and their singing and dancing were brilliant.”