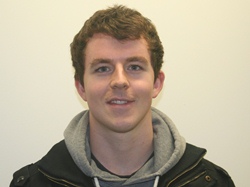 Stephen Whitten has been appointed as Pioneer Evangelist in nort Belfast by the Diocese of Connor and the Church Army.

A Pioneer Evangelist appointed by the Diocese of Connor and the Church Army is now engaged in establishing links with the community in north Belfast.

Stephen Whitten, 25, took up the post of Pioneer Evangelist a number of weeks ago. The role is the first step towards the Bishop of Connor’s aspiration to create a Centre of Mission for the diocese which will have a particular focus in north Belfast.

Speaking about the proposed Centre of Mission at the 2014 Connor Synod, Bishop Alan said: “This has been recognised as an area of deprivation and, in particular, is in need of education, education and education.”

The plan is that two Church Army staff trained in pioneer ministry will focus on establishing new communities of faith, and will also seek to train and equip parishes and people across the diocese in what this might mean for each and every context.

The post of Pioneer Lead Evangelist is currently being advertised, with a closing date for applications of March 30.

Bishop Alan said the new Centre of Mission would “offer new opportunities for training for everyone, whether ordained or not.” He added: “I want every member of the Church of Ireland to feel confident in their faith and to be resourced as they seek to live it.”

Stephen grew up in east Belfast and now lives in Dundonald. A former pupil of Grosvenor Grammar School, he worked in Lisburn for a year before doing a Foundation Degree in Rural and Countryside Management at Greenmount College.

He was involved in a youth drop-in outreach project in Moneyreagh, and was invited to do a Church Army Internship in Bangor, Co Down, for a year after finishing at Greenmount.

The first two months of Stephen’s internship were spent in Romania with the charity Networks Romania, which works with the Roma community. As well as helping to drill wells, Stephen was also involved in new church plants.

He returned to Bangor to continue his internship, working with the Primacy Church, and was involved in street outreach, running children’s clubs, community days, Messy Church, and also establishing a new church plant.

Stephen did a two-year degree in Environmental Science at the University of Ulster in Coleraine, maintaining his Church Army involvement with weekly Skype meetings on outreach and evangelism with other young Church Army members across the UK.

After graduating, Stephen went to Bolivia for three months with Tear Fund. “I was working with a charity that seeks to reduce levels of violence, particularly domestic and sexual abuse, which are very high in Santa Cruz. We ran workshops teaching young people about self-esteem,” he said.

It was when he was in Bolivia that he heard about the Connor post in north Belfast.

“I have always been passionate about evangelism and outreach, especially with people who would not be interested in Church,” Stephen said.

“I have done a lot of evangelism on the streets and with strangers, ministry to the homeless, and getting to know people within a community. I love doing it and I also love being part of a team.”

Since taking up his post, which is based in and around Whiterock and Glencairn parishes, Stephen has been getting to know the area and making connections with local people.

“I have been meeting people in the churches, but have also been out knocking doors in places like the Springmartin Estate. I am hoping to do some work with the youth there who have shown an interest in faith,” Stephen said.

“The vast majority of people have been very welcoming and very accommodating. Many say they pray and believe God looks out for them but that they have never been church goers. The main challenge is to come up with a form of community that is going to be suitable for these people and meet their needs.”