Menu
Home > News > CLCGB commemorate those who served in WW1

CLCGB commemorate those who served in WW1 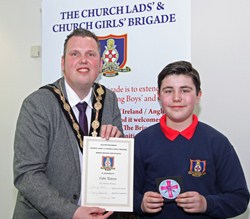 Calvin Patterson, Ballinderry Company, winner of the JTC Section and Overall Winner of the Badge Competition.

The weekend of March 20-22 was a hugely important one for the Church Lads’ and Church Girls’ Brigade.

For the past year the Brigade has been preparing to commemorate those from within its ranks who bravely fought for King and Country during the Great War.

On Friday evening, Andrew Ewing, Mayor of Lisburn, hosted a Presentation and Book Launch at the Island Civic Centre. Four lads, one from each of the Brigade’s four sections, were presented with their prizes as winners of a Commemorative War Badge Design Competition, including two from Ballinderry – Calvin Patterson (JTC) and Ward Patterson (Seniors). The other winners were Harry Smyton (The Martins) from Seagoe, Archie Clayton (Y Team) from Dobbin,. 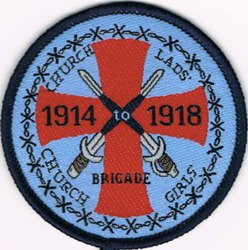 Calvin’s winning badge design to be worn on the uniform until 2018.

Calvin Patterson’s entry was chosen as the overall winner and his design has been made into a woven badge that will be worn on uniform until 2018.

A new book, ‘Ready and Willing – Irish Church Lads in the Great War,’ written by Johnny Conn, a former Captain of the Carnmoney Parish Company, was presented to the Mayor by Dean Robert Townley. The purpose of the book is to create a permanent record of the remarkable contribution made to the Great War by Irish Church Lads. Details of how to obtain ‘Ready and Willing’ can be viewed on the CLCGB Ulster Regiment website.

On Saturday night an Anniversary Dinner was held in the Brownlow Hotel, Lurgan. Several Anniversaries were being celebrated – the Ulster Regiment, the 2nd Battalion and the Seagoe Girls Company were all marking their 70th Birthdays. 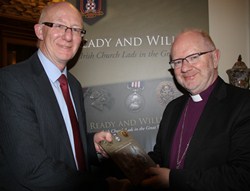 Johnny Conn, Carnmoney Parish, presenting the Archbishop with a copy of Ready and Willing.

The Archbishop of Armagh was Guest of Honour. Also in attendance were the CLCGB Governor, Liz Butterfield; the Brigade’s CEO, Audrey Simm, and The Hon Treasurer, John Smith.

The highlight of the weekend was the Annual Parade when hundreds of lads and girls marched to Seagoe Parish Church for a Service led by the Rector, Canon Terence Cadden.

This was the biggest parade for many years and during the Service a new War Memorial Banner was dedicated by the Archbishop, Most Rev Dr Richard Clarke. The Mayor of Craigavon, Colin McCusker, and his family were in attendance. 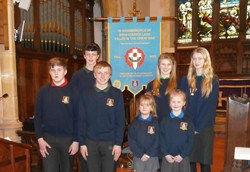 Members of Ballinderry and Carnmoney Companies pictured with the new War Memorial Banner. 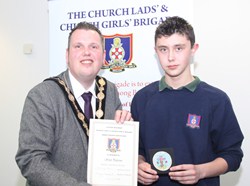