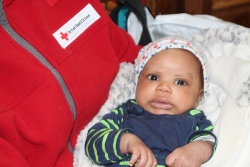 Little Adebobola isn’t bothered by all the fuss during the launch of the Red Cross hospital bags project in St Anne’s Cathedral.

The project was fully funded by a grant from the Dean’s Black Santa Appeal, which has allowed the Red Cross to put together maternity bags containing the essential items needed by a woman when she is admitted to hospital to give birth.

They include nappies, sleepsuits for newborns, wet wipes and other essentials for mum and baby, as well as a small amount of money to allow the woman to buy a nightdress and dressing gown. The bags will be made available to staff at the ‘New Entrants’ service within Belfast Trust who will distribute them to women who haven’t had the time or resources to purchase basic necessities. 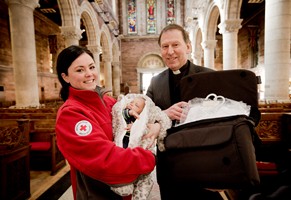 Clare McClure, with the help of baby Adebobola, shows Dean John Mann the contents of the Red Cross hospital bags.

Adebobola’s mum brought him along to the launch on March 31. She had to flee from her home in Nigeria when she was heavily pregnant with her first child, and arrived in Belfast with nothing.

She did not have the benefit of a Red Cross Hospital Bag when her first little boy was born, but, now mum for a second time, she said the project would be a huge help to refugees arriving in Northern Ireland in the late stages of pregnancy.

At the launch, the Dean of Belfast, the Very Rev John Mann, was delighted to hear that one of the hospital bags had already been given to a new mum recently arrived in Northern Ireland to seek asylum. 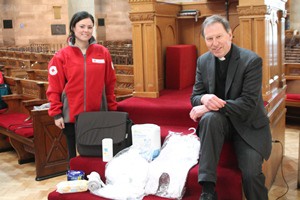 Essentials for the new mum inside the hospital bags for pregnant asylum seekers.

Clare McClure, Refugee Service Co-ordinator for the Red Cross, said that last year 22 ladies in their third trimester of pregnancy had arrived as ‘New Entrants’ in Northern Ireland. The previous year that figure was 35.

“Anyone who has had a new baby knows that packing your hospital bag is a really important part of preparing for the birth,” said Clare. “It’s hugely important for the dignity of the mother and the comfort of the new baby that they have a bag of basics with them when they are admitted into hospital for their labour. 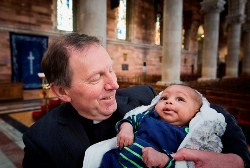 Dean Mann gets to know six week old Adebobola during the launch of a Red Cross project funded by the Dean’s Black Santa appeal.

“Many of these women will be getting by on £35 a week and finding it difficult financially to even meet the nutritional requirements of pregnancy. Some are unable to afford public transport and have to walk to ante-natal appointments. We’ve seen cases where women being admitted to hospital didn’t have a nightdress, toiletries, nappies or even something to dress their new baby in.”

Dean Mann said: “The scope of Black Santa Fund applicants is wide, but the ethos has always been largely to support the individual in need of help in our local community.

“What the Red Cross is providing suits the objectives for which the charity sit-out exists and I am sure will be much appreciated by the women who receive these maternity bags at what is both an exciting but hugely demanding moment in their lives.”