Menu
Home > News > ‘The Vicar of Baghdad’ to speak in Portadown

‘The Vicar of Baghdad’ to speak in Portadown 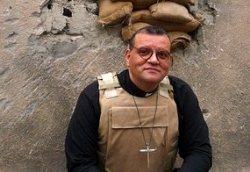 The Rev Canon Andrew White, Anglican Chaplain of St George’s Church in Iraq and known as ‘The Vicar of Baghdad,’ will be speaking publicly in St Mark’s Parish Church, Portadown, on Friday April 17 from 2-4pm.

The event is open to all and will begin with a time of worship.

St Mark’s is co-hosting Canon White with the Full Gospel Businessmen’s Fellowship. Any church leaders who would wish to meet Canon White in person will have a brief opportunity to do this from 1.30pm to 2pm at the church.

Having worked for many years in Israel and Palestine, including negotiating the end of the Bethlehem siege in 2002, Canon White now works almost exclusively in Iraq, earning him the nickname ‘The Vicar of Baghdad.’

He has led St George’s, in the heart of Baghdad, since 1998 and divides his time between Iraq and the UK. He has a packed speaking and preaching itinerary which takes him all over the UK as well as to North America.

He is also the President of the Foundation for Relief and Reconciliation in the Middle East which exists to support his unique work at St George’s and in reconciliation.

In the face of significant threats to him personally and repeated bombings of the church, Canon White pastors one of the largest churches in Iraq. St George’s ministers to more than 550 local Iraqi Christian families and operates well outside the safety of the International Green Zone. Most of the congregation are women and children – widows and orphans

The organisers highlight reasons to come and listen to Canon White when he delivers his fundraising talk in St Mark’s, Portadown.

The Rev Keith Marshall, Curate Assistant St Mark’s, said: “Please come and join us in our worship and listen to what this servant of the Lord wishes to share with us and offer your support for fellow Christians in Iraq and the Middle East.”