The Imani team in Saint Nicholas with the rector the Rev Elizabeth Hanna.

The Parish of Saint Nicholas, Lisburn Road, Belfast, welcomed the Rev Naftaly Lemooke and an Imani (Faith) team from the Diocese of Kajiado, Kenya, for a ‘rest day’ on April 13.

Naftaly had spent several months, first in Magherally and Annaclone, Diocese of Down and Dromore, and then in Saint Nicholas’, while he studied at Belfast Bible College.

‘Tour Guides’ for the day were Mrs Heather Griffen and the Rev Elizabeth Hanna, both of whom had been on the CMS Ireland Pamoja team which helped to build a church at Lemasusu in the Diocese of Kajiado. 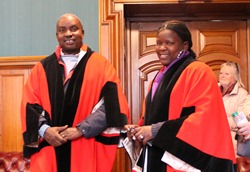 The Rev Naftaly and Mrs Elizabeth Adhiambo Sunda in the robes of Belfast City councillors at City Hall.

The day began with a tour of Saint Nicholas’ Church and a catch-up with parishioner Dr Gary McKee who, with his wife Dr Patricia, had worked in the clinic in Kajiado while their sons did general maintenance around the site. Saint Nicholas is one of the churches in a partnership link with Kajiado and every opportunity to renew friendships is welcomed.

The team then enjoyed lunch at the rectory before joining a conducted tour of Belfast City Hall.  In the robing room the Rev Naftaly and Mrs Elizabeth Adhiambo Sunda  were dressed in the very expensive councillors’ robes and all got to sit in the Lord Mayor’s seat! 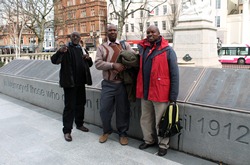 Resting and relaxation sometimes includes retail therapy … so the day finished off with a few hours of shopping in Royal Avenue before returning to St Paul’s Parish, Lisburn, the host church for this part of the partnership visit.

The team moves on to Limavady and then Enniskillen before returning to Kajiado at the end of April.

Members of the Imani team which visited Saint Nicholas on April 13 were: The Rev Naftaly, Elizabeth Adhiambo Sunda (one of the founding teachers of the Girls’ School), David Dakany Osoi (Diocesan Accountant), Samuel Somoire Moinket (Chair of the Diocesan Board of Education), Lucy Nashipae (student at the Girls’ School) and Anne Sotian Kilanka (former pupil who hopes to begin law studies in September).