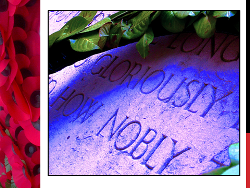 LEST WE FORGET – One of the artworks by Lise McGreevy from her WW1 commemoration exhibition at Belfast City Hall.

St Anne’s Cathedral’s collection of books containing the names of all known to have died in World War One is to feature in an exhibition opening in Belfast City Hall this week.

Belfast Visual Artist Lise McGreevy has compiled a unique collection of WW1 art and artefacts never seen before in one location and will display these as part of the centenary celebrations.

“I am thrilled that the Royal Ulster Rifles’ and Somme Museums and St Anne’s Cathedral have kindly agreed to exhibit some of their fantastic WW1 artefacts together as part of my on-going ‘Lest We Forget’ project which commemorates all those from Northern Ireland who lost their lives during the Great War,” said Lise.

“It is brilliant to know that the three great historical institutes will bring items from their iconic WW1 archives together in one venue for the first time ever. These precious items will be an excellent contextualisation for this poignant event, which depicts and commemorates all those who played such a vital role and especially those who gave the ultimate sacrifice.”

THANK YOU TEDDY – This uniformed teddy was a gift from a Royal Ulster Rifles’ soldier to the nurse who took care of him when injured during the First World War and is on display in the WW1 exhibition at Belfast City Hall.

According to Lise, the event will give all those who visit the opportunity to enjoy not only WW1 art and memorabilia, but also let them see the reality and human story behind WW1 for the local men and women who served in many eclectic and dangerous ways during its four year duration.

Gavin Glass, Curator at Royal Ulster Rifles Museum, said that with such a wide and varied array of historical and cultural pieces from WW1 within their collection, it was a task to pick the chosen items.

“With the human story at the core of this event, we have chosen some very poignant memorabilia to display at City Hall, such as a Teddy bear in full uniform made by a wounded Irish soldier for the nurse who looked after him, and a German fife taken from a prisoner of war in 1916.”

Another harrowing RUR artefact on display will be a metal cup with a bullet embedded at its centre, which saved the life of a soldier under enemy fire.

Not only the men who risked their lives are represented in the exhibition. The Somme Museum, Newtownards, will contribute interesting pieces reflecting the true grit of local women during the war years.

For Lise the exhibition marks the end of the first stage of her project. She will now research and photograph the nostalgic ‘Ireland’s Memorial Records 1914-18’ which give many details of all those from Northern Ireland and Ireland who died during WW1. 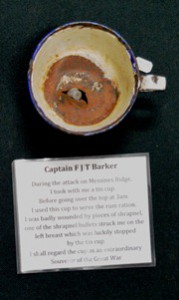 “St Anne’s Cathedral has given me unlimited access to all eight of these historic ledgers which they have kept safe in their vaults for decades, a truly amazing experience for any photographer,” Lise said. “A selection of the books shall be on display during the exhibition and are definitely worth a look!”

The exhibition will be launched at City Hall on Tuesday April 21 and the evening will include the re-enactment of a scene from Belfast Playwright and Senior Lecturer at Queen’s, Brenda Winter Palmer’s WW1 Drama, Medal in the Drawer, and a recital of poetry and music by cadets from the Reserve Forces and Cadets Association for Northern Ireland.

Lise said: “It will be a poignant evening to remember one fact that none of us should forget, that being the thousands of men and woman from Northern Ireland who lost their lives during WW1, and indeed WW2 and in more recent times, to help give us world peace.”

The exhibition is free and shall be hosted in the East Wing Gallery Space at Belfast City Hall from April 21-30.