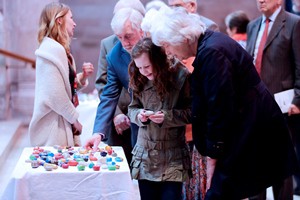 Sophia Knox (10) selects a hand-painted stone during the 70th Anniversary Service. Each of the colourful stones was painted with one of the words ‘Give’, ‘Act’, ‘Pray’, ‘Faith’, ‘Hope’ and ‘Love’. Photo credit: John Murphy/Aurora PA

‘Everything that Christian Aid does is, in truth, about the search for justice.’

With these apt words Northern Ireland’s Minister of Justice, David Ford, began his sermon at Christian Aid’s 70th Anniversary Thanksgiving service in St Anne’s Cathedral, Belfast, on April 19.   As the Minister explained, ‘because fundamentally, the provision of decent standards of life is an issue of justice. ‘

Around 400 supporters and friends filled St Anne’s along with representatives from all of Ireland’s main churches.  They were marking seven decades since British and Irish church leaders came together at the end of the Second World War to establish the Inter-Church Aid and Refugee Service, in response to the refugee crisis in continental Europe.

As the work of the churches’ agency expanded around the world in the years that followed, so it changed its name to Christian Aid.

Mr Ford, a long-time supporter, was the guest speaker.  He made the argument that campaigning is as important as giving money in the struggle to end world poverty. 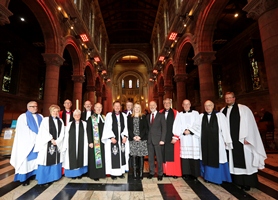 “Of course much of the work of development agencies, including Christian Aid, involves practical work at the grass roots, providing basic services to meet day to day needs,” he said.

“It is easier to motivate donors at times of crisis, to provide the basic needs of food, clean water and shelter, than it is to talk about long-term development goals, sustainability and justice.

“‘As we look at how society is changing in these islands and throughout the world, it seems clear to me that we cannot carry out our Christian duties solely by individual acts, or by individual giving.

“Of course they are important, but we will only bring justice to the world’s poor by a mixture of charitable action, political action and public campaigning.

Referring to one of the readings during the service, the parable of the sheep and the goats in Matthew 25, Mr Ford said: “Our Lord makes it absolutely clear that we have obligations to those less fortunate than us.

“It is easy, perhaps, as we look back on the work of Inter-Church Aid and Christian Aid to identify with feeding the hungry and healing the sick.  It is perhaps less easy to identify with visiting those in prison if we believe their crimes merit imprisonment.  Yet the instruction is there, clearly and specifically.

“As we look back over 70 years of the work of Christian Aid, we can see both a continuous thread of commitment and a series of changes as the organisation adapted to meet the new needs of our partners across the world.  Throughout, there has been a dedication to put into practice the injunction that Jesus gave us in that parable in Matthew 25.”

The Minister continued: “We may feel a sense of achievement at times or we may feel a sense of disappointment that, 70 years on, so much remains to do.  But let us never lose heart as we work in partnership to provide food and water, to clothe, to heal and to teach and to visit those in prison.

“For we do all that to provide justice for men, women and children in every part of the world, in the name of the God who created us all and seeks the best for us all and who loves us all.’

Adrian Horsman is Head of Communications and Media at Christian Aid Ireland.  Christian Aid is aiming to hold 70 fundraising events in Ireland throughout the year to mark its 70th anniversary.  If you would like to know more, please visit christianaid.ie