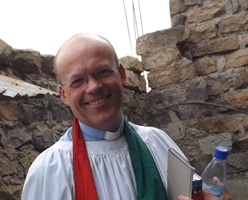 The Rev Roger Thompson who has been appointed Partnership Co-ordinator with CMSI, on a recent sabbatical in East Africa.

Church Mission Society Ireland has announced the appointment of the Rev Roger Thompson, rector of Kilwaughter and Cairncastle with All Saints’, Craigyhill, Diocese of Connor, as a CMSI Partnership Co-ordinator.

This is one of two new appointments announced by CMSI this week – Mrs Linda Abwa will return from Nigeria where she has been a missionary for the last 12 years to also take on a new role as Partnership Co-ordinator.

Roger has been rector of Kilwaughter and Cairncastle with All Saints’, Craigyhill, since 2004. As rector of a CMSI Link Parish, a former CMS Mission Partner, the husband of a former CMSI Mission Partner (Fiona) and someone who has recently taken part in a Short Term Experience Placement, Roger is very familiar with CMSI.

He said he is really looking forward to joining the staff team. 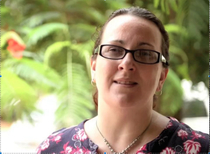 Mrs Linda Abwa will return from Nigeria where she has worked as a missionary to take up the role of CMSI Partnership Co-ordinator.

Linda, originally from Co Antrim, is a trained nurse and midwife, who has spent the last 12 years working in Nigeria in the area of HIV/AIDS as a missionary with Mission Africa.

In 2006, she married Billy, whom she met in Nigeria. They have two children, Nathaniel and Niah. The family are currently packing up their home in Nigeria and saying their final farewells before returning to Ireland.

An announcement of the appointments on the CMSI website stated: “Following the appointment, in January, of Jenny Smyth to the role of CMSI Mission Director, the Society recently made two significant appointments to the staff team.

“In light of Ronnie Briggs’ departure from the staff team in February (to return, with Maggie, to Kenya) and Jenny’s change of role, there was an urgent need to recruit two new Partnership Coordinators. These are key positions on the staff team, particularly at a time when CMSI’s priority is the development of Partnership Links. It was a huge encouragement, therefore, to see such a positive response to the recruitment process, with a strong field of candidates interviewed on 14th and 15th April.”