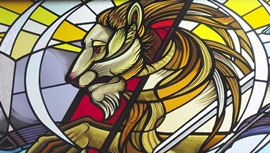 On Sunday April 26 the highlight of the 11am Patronal Festival Service at St Mark’s, Ballymacash, was the dedication of a new stained glass window in memory of Sammy and Peggy Bryson.

The window, which measures approximately six feet by three feet, was designed by David Esler, Proprietor of Leadlines and David Esler, based in Donegore, Co Antrim.

The window depicts the winged lion which is the symbol of St Mark’s gospel and also contains a picture of a sword, recalling two New Testament passages – Ephesians 6:17 and Hebrews 4:12 – where the sword represents the Word of God.

The stained glass panel dedicated on April 26 is the centrepiece of an overall artistic design which, when completed, will cover most of the high-level glass screen created in St Mark’s as part of the major renovation and redesign of the church carried out in 2010.

In his address during the Patronal Festival Service the rector of St Mark’s, Canon George Irwin, made reference to the significance of the winged lion both as a symbol of St Mark the Evangelist and also an ancient symbol of the resurrection. He also recalled the sterling service rendered to the church and parish over the years by the late Sammy and Peggy Bryson who were foundation members of the Parish of Ballymacash which was created in 1967.

Reflecting on the progress of St Mark’s Church over the years Canon Irwin said: “Thanks to the grace and guidance of God and the unremitting commitment of people down through the generations, the church has maintained its witness.

“Sometimes, difficult decisions have had to be taken and courage was required, and each time we have been blessed by God.  And if today, on the occasion of our Patronal Festival, we look back it is not because we are sentimental, but in order to remind ourselves that we stand on the shoulders of those wonderful servants of God like Sammy and Peggy Bryson whose love of God and commitment to the extension of his Kingdom in days gone by have to a great extent made us what we are.”