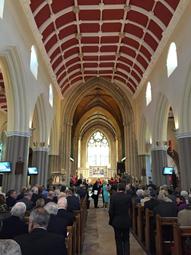 Gathering for the General Synod Eucharist in St Patrick’s Cathedral, Armagh, at which the Bishop of Connor was the preacher.

The Bishop of Connor, the Rt Rev Alan Abernethy, preached at the Synod Eucharist which preceded the opening of the General Synod of the Church of Ireland taking place from Thursday May 7 to Saturday May 9 in Armagh.

The Synod Eucharist was celebrated in St Patrick’s Cathedral, Armagh at 10.30am on Thursday.

Bishop Abernethy preached from St John’s Gospel on the theme of ‘Love one another’ and drew on recollections of faith put into practical action by different ordinary but influential Christian people.

He spoke about how God has ‘taken ordinary people and made them special by his amazing and incomprehensible love’.

FULL TRANSCRIPT OF THE SERMON:

It wasn’t anything he said but it was the fact that he took my questions seriously and never made me feel I was a nuisance. There is no doubt that I was always asking questions because I needed to wrestle with faith and I couldn’t just accept what others said. He was a man who always looked old and had obviously suffered from polio from birth. It was hard not to imagine him being in pain and yet he always made us feel that we were important and that we were listened to. I am referring to my bible class teacher, Mr Courtney, in Willowfield Parish when I was a young teenager. He helped me see my questions as helpful and that this was an important part of my faith journey.

She was so self-effacing and gentle but behind that gracious smile there was such depth. She had spent much of her life serving God overseas and would say little but she would envelop you in her prayerfulness and spirituality. There is no doubt as I learnt to listen to her that she taught me so much about the contemplative life. One of her great gifts was that she could express her love for God in her oil paintings and I still have one she gave me of Scrabo Tower near Newtownards. My visits to her, when I was young curate, lifted my spirits and helped me sense the presence of the God who could be found in the quiet places within.

I also recall Ralph Shaw, a gentle giant of a man. He and his wife, Pearl, had supported me when I was an ordinand by their prayers and hospitality when I was home from college. This friendship continued during my first two years when I was a curate when once a week I would visit them for an evening meal. When I arrived Ralph and I were left to chat and then food would be served and after eating we were sent to finish our chat before I would go on my way. These were very special moments of wrestling with God, church, people and self. I would leave with my spirit lifted – and the cakes were always very special.

There are so many people I could describe who helped shape and support me on this journey of discipleship and ministry. People who simply gave me time and space to verbalise the internal questioning of faith amidst the struggle of living, especially in the context of ordained ministry. There are still friends who do this today and I am and will be forever grateful for those who have and for those who continue to show me the loveliness of Jesus.

I must confess that I find John’s Gospel particularly helpful. It maybe the wonderful themes that are so beautifully crafted into the theological musings of the apostle. There are the lovely threads and themes of light and darkness, the signs of the kingdom from the miracle of water into wine, to the cry of victory in the jaws of defeat on the cross when Jesus cries, ‘It is finished’. But my favourite is when he describes the mystery of incarnation when the word became flesh and dwelt among us. God came into the mess of darkness and the darkness tried to snuff it out but the light is still shining. The glory of the presence of God in the chaos and confusion of what it is to be human.

The passage today leads us into the mystery and joy of discipleship. A passage that has been abused to justify war when it is clearly about the amazing self-giving of God in Christ, as a model and template of love that is beyond our understanding. Jesus commands us to love one another and to remain in his love and he has shown us what this looks like as total self-giving. We are commanded to love by the one who loves unconditionally and at immense cost. That love frees us to be fully human and to know a joy that is not about happenings and happiness but about being free to be the people we are meant to be, made in the image of God. This freedom also calls us to bear fruit, to incarnate the presence of Jesus not in words but in how we live, in our very being.

There are many people who have influenced me who lived this joy, who were able to bear fruit because they sought to follow this Jesus and his call to love. We all can describe such people and it is true that nearly everyone who walks in faith does so because of the influence or fruit of someone else.

However, there is also a delightful phrase in the middle of this passage which is the kernel of discipleship and has been something I have noticed in those who have shaped me. There is the humility that comes from knowing, ‘You didn’t choose me; I chose you’. It is something that never cease to amaze me, how God takes the ordinary and makes it special. The stable or lean-to in a strange place called Bethlehem. Pieces of wood that formed a cross of torture and yet as John’s gospel recounts it as a tool of victory. A large stone at a tomb given by a stranger, now an eternal symbol of hope. Water that becomes to us the water of regeneration. The bread and wine of Passover that in blessing become to us the mystery of his body and blood. Please let us leave that as mystery and not try and define how He takes the ordinary and makes it special. Then there are the people who I have described and the countless we all could name, how God has taken ordinary people and made them special by his amazing and incomprehensible love. You did not choose me, but I chose you. God takes the ordinary and makes it special.

That strikes me as a good note to sound as we begin our synod together … and I do hope there will also be some nice cakes to enjoy!