Menu
Home > News > Kieran gets on his bike for Zambia project

Kieran gets on his bike for Zambia project 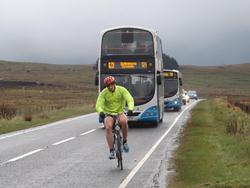 Kieran pedalling up Shane’s Hill on the A36 ahead of the Larne to Ballymena School buses.

Sixth form student Kieran Thompson, a parishioner of St Patrick’s, Cairncastle, pedalled to school on Wednesday May 6 to raise funds for  a house-building project in Africa.

Kieran is part of a 17-strong group from Slemish College, Ballymena, preparing to visit Ndola, northern Zambia, in July.  Alongside studying for A-levels and training with the Ulster U-19 rugby squad, Kieran took on the challenge of cycling the 16 mile school bus route from Larne to Ballymena to help reach his fundraising target of £800.

With sponsorship from school friends, family and residents in his home village of Ballygally, he has so far raised more than £250.

This money, when added to funds raised by the other team members, together with other school fundraising, will eventually total £12,000 – enough to build four new homes for families currently living in shanty accommodation. 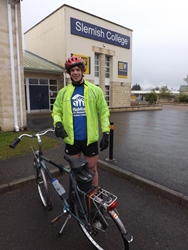 The team, led by Slemish College vice principal Michael Bennett, is travelling to Africa with ‘Habitat for Humanity,’ a non-profit Christian movement dedicated to eliminating sub-standard housing and homelessness.  Founded in 1976 the agency currently works in 70 countries and has served more than one million families.

After his cycle, Kieran said: “It was quite a work-out getting up Shane’s Hill, and my legs were pretty sore by the time I got to school, but it will all be worth it when we get to meet those families in Zambia.  I am so grateful for all those who have supported me.”