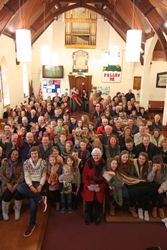 Parishioners of St John’s Parish Church, Ballyclare, found themselves the ‘focus’ of attention when a photo of them ‘snapped’ a prize in the Church of Ireland’s Central Communications Board (CCB) photography competition.

The picture was entered by parishioner Andrew Brannigan. The competition aimed to highlight church life in action, and replaced the annual communications competition which has traditionally focused on print, web–based and social media.

Andrew’s picture of parishioners attending morning service at St John’s picked up third prize, and along with the other winning entries will feature prominently on the Church of Ireland website as it is redeveloped this year.

The judges said of Andrew’s picture: “This is an exuberant photo of a worshipping congregation, with a good balance of people and place – showing the vaulted ceiling of the church and the organ pipes to good advantage. The photographer has really taken command, with everyone looking into the camera – with lots of smiles and people enjoying a happy moment – despite the fact that most people hate being photographed! We love the piggy–backers at the door, creating an informal atmosphere.”

The organisers said there had been an excellent number and range of entries and the judges – independent professional photographers – were very impressed with the standard, saying: “The winning photographs offer a lovely portfolio of parish life. No two entries were similar, showing just how diverse church life is. We had a difficult time in choosing from over 40 entries, from snapshots to more carefully staged images, and we should always remember that a snapshot can be the beginning of a great photo!

The Archbishop of Armagh, The Most Rev Richard Clarke, presented the prizes to the winners at the closing day of the General Synod meeting in the Armagh City Hotel on Satruday May 9.

First prize was won by Lilian Webb of the Parish of Celbridge & Straffan with Newcastle–Lyons (Diocese: Dublin & Glendalough) for her photograph taken on Easter Sunday: the Sunrise Service at Castletown with Christ Church, Celbridge in background.

Runner up was Seán O’Brien from Portlaw, Co Waterford for his photograph of parishioners from the Fidown Union of Parishes (Ossory Diocese) arriving at Holy Trinity Church, Portlaw, having finished a short parade through the town with donkeys, to commemorate Christ’s entry into Jerusalem before his trial and crucifixion.

For full information about the winners – and a look at their photographs – visit the General Synod website.