Sunday May 10 was a memorable day in the 200 year history of St Patrick’s Church, Cairncastle, when dignitaries, parishioners and visitors packed the church for a wonderful bicentenary celebration service.

This was followed by a festive meal in the Halfway House Hotel, Ballygally.

Proceedings began in the attractive County Antrim church with a communion service led by the Rev Roger Thompson (rector of Kilwaughter & Cairncastle with All Saints’, Craigyhill).  Welcoming the many visitors, he introduced the preacher – the Most Rev Dr Richard Clarke (Archbishop of Armagh) – and celebrant the Rt Rev Alan Abernethy (Bishop of Connor). 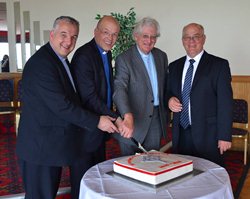 The rousing worship was led by organist Derick Jenkins with an anthem and other pieces provided by a choir specially recruited for the occasion.  Lessons were read by Lay Reader Mr Tom Irwin and former rector Canon Bill McNee, before Archbishop Clarke spoke on the theme of ‘Where have you come from, where are you now and where are you going?’

He looked back to 1815 when St Patrick’s was built at a time of great confidence and growth in the church, noting the very different circumstances today.  If the church of today is to regain that confidence, he said, we must commit ourselves to a life of prayer and have the courage to move beyond the preservation of the past. 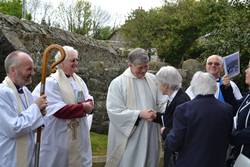 After the service the festivities continued with a meal at the Halfway House Hotel, where Roger presented the visiting clergy with limited edition prints of the church (from a painting by local artist Rosalind Fair).  He also spoke of his forthcoming move to a new job with Mission and Development Agency CMS Ireland, thanking the parish for all their support over the last 11 years.

He said that he and his wife Fiona, and sons Kieran and Nathan, had been greatly blessed by their time living in the area, and will be sad to leave.  Nevertheless he was looking forward to his new role as Partnership Coordinator – which will involve liaising between churches in Ireland and projects in various Developing Countries in Africa and Asia. 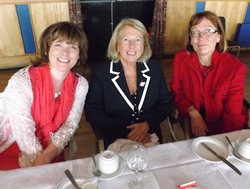 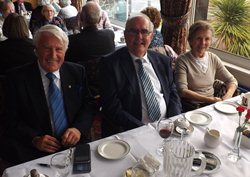 Herbie Francis and Bill and Jean Rainey at the bicentenary dinner.