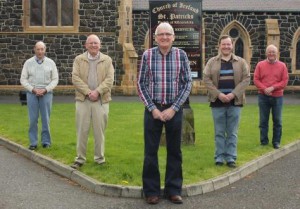 The Ballymena Bellringers outside St Patrick’s Church on VE Day 2015.

On Saturday May 9 the bells of cathedrals and churches throughout the United Kingdom rang for the 70th Anniversary of VE Day.

In Ballymena the bells rang out from the tower at St Patrick’s Parish Church at 11am, as they had done 70 years ago.

Church bells have been sounded for hundreds of years to ‘call the people to worship,’ but they are also used to herald a royal or civic occasion, weddings, and toll for a funeral. 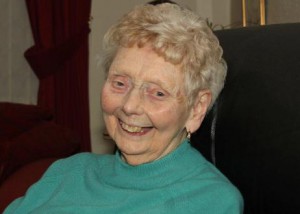 Saturday’s ring was a joyous occasion as it commemorated the ending of World War II in Europe.  Former ringer Jean Letters, who remembers the VE Day celebrations, was taught to ring after the war, as the bells throughout the United Kingdom were silenced during the hostilities and were only to be rung if there was an invasion.

Jean, whose father was also a ringer, was taught to ring along with her brother Sam, Tower Captain at Ballymena, and their brother Robert.