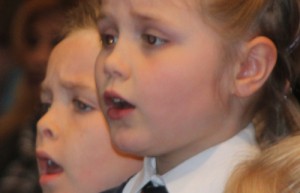 A real treat is in store on Sunday June 7 when the pupils from Belfast Cathedral’s Choir Schools come together in St Anne’s for their end of year concert.

Up to 300 children from the three north Belfast primary schools – Cliftonville Integrated, Edenbrooke and Sacred Heart – will be singing a variety of songs for parents, friends and special guests.

The children are all taught by St Anne’s Choir School tutors, Catherine Harper and Thérèse Woodfield, and Master of the Choristers David Stevens.  This innovative cross community project, established in 2013, means the Cathedral’s singing tutors are working in the schools teaching pupils across a range of ages every day during termtime.

The concert on June 7 will give the Choir School pupils, some of whom have already progressed to the Cathedral Boys and Junior Girls’ choirs, an opportunity to show just how much they have learned.

The concert will feature a mixed bag of songs from the shows and pieces which the children have been working on all year which require them to sing in harmony not just unison.

Items in the programme for example, include Consider Yourself, and Food, Glorious Food from Oliver by Lionel Bart; I Closed my Eyes from Joseph and his Amazing Technicolour Dreamcoat by Andrew Lloyd Webber; and Grandfather Clock by Dunhill.

The children from the Cathedral’s Treble line and Junior Girls will also be singing on their own and the Senior Girls’ Choir will support the children throughout.

It is hoped that some very special achievements will be recognised at the concert, which will conclude with buns and drinks all round.

Everyone is very welcome to attend this concert which begins at 3.30pm. Admission is free.