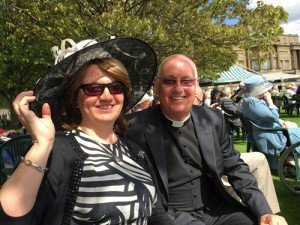 Archdeacon Stephen McBride and his wife Helen enjoy the sunshine at the Royal Garden Party in Buckingham Palace.

The Archdeacon of Connor, the Ven Dr Stephen McBride, and his wife Helen attended a Garden Party at Buckingham Palace last week.

Reflecting on the day, Stephen said: “I was surprised and delighted when the invitation arrived and the occasion was all the more special when the whole afternoon was bathed in such glorious sunshine.

“The Queen, The Duke of Edinburgh, Prince Charles and Camilla, Prince Edward and Sophie were all in attendance.  There were over 7,000 guests and while only a small group of people managed to share a few words with the Royal Family, everyone was made to feel included in the whole occasion.

“It was marvellous to sit in the sunshine, enjoy the music of two military bands and have an opportunity to explore the gardens of the Palace which were in full bloom.”

The Archdeacon added: “It was a day filled with many memories we will long treasure.”