Bishop and Dean guests at service attended by Royal couple 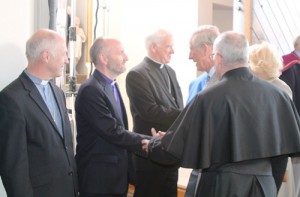 The Bishop of Connor and the Dean of Belfast were among the dignitaries who welcomed the Prince of Wales and the Duchess of Cornwall to a church service on Thursday May 21.

The service was to mark the 200th anniversary of St Patrick’s Roman Catholic Church in Donegall  Street and the role it plays in the city of Belfast.

Prince Charles and the Duchess, who are on a tour of Ireland and Northern Ireland, were greeted on their arrival by Her Majesty’s Lord Lieutenant for Belfast, Fionnuala Jay-O’Boyle, who introduced the Royal visitors to a line-up of dignitaries outside the church. They included First Minister Peter Robinson; Deputy First Minister Martin McGuinness; Secretary of State Theresa Villiers; Lord Mayor of Belfast Councillor Arder Carson and Chief Executive of the City Council Suzanne Wylie. 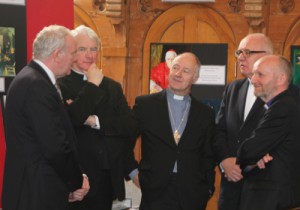 The Bishop of Connor, right, chats with, from left: Deputy First Minister Martin McGuinness, Bishop Noel Treanor, Methodist President the Rev Peter Murray, and the Rev Rob Craig of the Presbyterian Church while waiting for the Royal guests to arrive at St Patrick’s RC Church.

Moving inside the church, flanked by a Guard of Honour by the Knights of St Columbanus, Prince Charles and the Duchess were introduced to Church leaders by the administrator of St Patrick’s, Fr Michael Sheehan.  Clergy included the Bishop of Connor, the Rt Rev Alan Abernethy, The Roman Catholic Bishop of Down and Connor, the Most Rev Noel Treanor, Methodist President the Rev Peter Murray;  the Rev Rob Craig, representing the Presbyterian Church, and the Dean of Belfast, the Very Rev John Mann.

The historian, Prof Eamon Phoenix, gave the Royal couple a brief history of the parish and its significant contribution to the life of Belfast.

They also viewed the church’s most treasured artwork, the Madonna of the Lakes altarpiece, painted and gifted to the parish by Sir John Lavery, who also painted Queen Victoria and King George V. 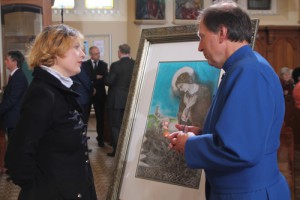 Artist Eve Parnell, whose picture of St Brigid was commissioned by St Patrick’s as a gift for the Royal couple, talks about her work to the Dean of Belfast, the Very Rev John Mann.

Dublin artist Eve Parnell’s beautiful  pencil and chalk  on tissuepaper copy of St Brigid as she is represented in the Lavery painting was presented as a gift from St Patrick’s to the Royal couple during their visit, and Eve had the opportunity to talk to the Prince and Duchess, as did pupils and staff from a number of local schools.

Another gift presented to the visitors was a pair of knitted Aran cardigans for grandchildren George and Charlotte.

Parishioners invited to the service to celebrate the 200th anniversary included some members of the St Patrick’s cross community group, who were not aware they would be meeting Royalty until after they arrived at the church.

They were delighted to have the opportunity to shake hands with Prince Charles and the Duchess, and one of the group said it had been a real privilege. Another lady commented that, had she known about the special guests in advance, she would have had a spray tan! 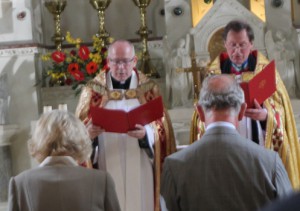 Fr Michael Sheenan, Administrator of St Patrick’s, and Dean John Mann say the Blessing together at the service attended by the Prince of Wales and the Duchess of Cornwall.

Fr Sheehan and Dean Mann jointly led the service of readings and prayers and said the Blessing together. Parish chorister, Bronagh Rafferty, sang ‘How Beautiful are the Feet’ from Handel’s Messiah, and was accompanied by Parish organist, Nuala Murray, and the Prince of Wales and Duchess of Cornwall signed their names before leaving.

Dean Mann said St Anne’s and St Patrick’s had a good relationship. “It was a great privilege to be asked to take part in the service today,” he said, adding that he had enjoyed the opportunity to chat to both Prince Charles and the Duchess of Cornwall.