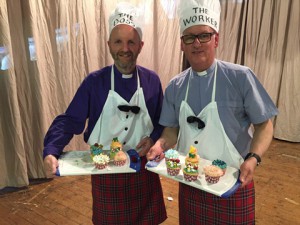 Displaying their cupcakes are the Bishop of Connor and the Archdeacon of Connor.

The Bishop of Connor and the Archdeacon of Connor donned their pinnies and dusted off their rolling pins to compete in the Mothers’ Union Great Connor Bake-off.

More than 250 members of the Mothers’ Union from across the diocese were in the Parish Hall at St Patrick’s, Ballymena, to see the Rt Rev Alan Abernethy and the Ven Dr Stephen McBride demonstrate their baking skills.

The Bake Off was organised by Roslyn Graham, the diocesan young members’ rep, along with the Young Members’ Committee, to raise funds for the MU Mums in May project.

The two clerics were kitted out in tartan aprons and chef hats for the occasion.  They were ably assisted by Ida (aka Roslyn Graham, Ballymoney, Finvoy and Rasharkin) and Mary Doll (aka Beth Hayes, Armoy and Drumtullagh), under the expert eye of Adele Elder from Armoy and Drumtullagh

Tense moments as the 250 members of the audience cast their votes!

Bishop Alan and Archdeacon Stephen had to decorate six cupcakes with a variety of designs.  At the end of stage one, Stephen surged into the lead when the audience voted in favour of his creations.

The second challenge was to build and decorate a gingerbread house.  Although the Archdeacon studied architecture, his efforts as a builder were ‘rather pathetic’ (his own words!) and Bishop Alan was the unanimous winner of stage two.   The Bishop’s house and garden managed to stand up while the Archdeacon’s effort collapsed into a sorry heap.  One challenge all was a very fair result.

Roslyn was delighted that the evening raised £921 towards a literacy project in Ethopia which is being supported by the Mothers’ Union across the 12 dioceses in Ireland.  Individuals and communities will be transformed through the development of literacy and numeracy skills.