Who Killed the Vicar? Murder Mystery in Cairncastle 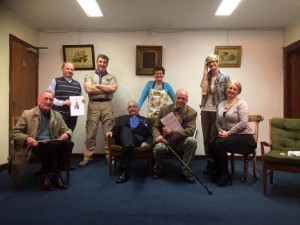 The cast of ‘Who Killed the Vicar’ on stage.

The play was directed by church member Simon Hunter, and the cast included the rector the Rev Roger Thompson, members of the congregation and actors from Larne Drama Circle.

The play was set in the fictional village of Steeply Willows and had an ‘Agatha Christie meets Vicar of Dibley’ flavour.

There was an exceptional turnout with people coming from all the local churches and a great evening of fun, food and crime-solving was had by all. 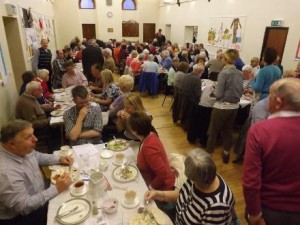 The large audience of master sleuths at the Cairncastle Murder Mystery fundraiser.

Fifteen teams battled it out, but only one fully solved the murder – well done team “Clueless”!

A light supper was provided during the interval by the St Patrick’s CAMEO group.

The rector avoided fatal injury by playing the role of the church organist, while glebewarden Trevor Hassin donned a clerical shirt and collar to play the part of the murder victim.

Roger said afterwards: “This was a first for our congregation and it went down a storm!  It was great fun rehearsing and everyone seemed to enjoy the results.  In addition we raised £863 for Church Funds.”