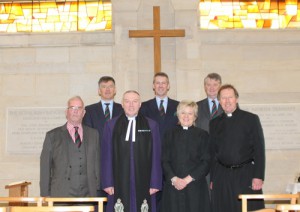 Thirty four years after it was consecrated on the anniversary of D Day, the Regimental Chapel in St Anne’s Cathedral, Belfast, has been re-ordered and rededicated.

The Chapel hosts a Communion Service every year on the anniversary of the dedication for the Royal Irish Regiment.

The Dean of Belfast, the Very Rev John Mann, said: “The re-ordering has been undertaken to make it more user-friendly and is now to be used for the 8.30am Communion Service every Wednesday, when there will be a special focus on prayers for peace. We will also remember the members of the armed forces and service families in times of danger.”

The reorganisation, which is part funded by the Royal Irish Chapel Committee and by the Cathedral Board, provides more space for seating in the Chapel, improved lighting over the altar and new kneelers.

At the service, Lt Col David Twigg, a member of the Royal Irish Chapel Committee since it was founded and its chairman for the past 15 years, relinquished the Chair to Lt Col James Linford, former Chief of Staff of the Royal Irish Regiment. 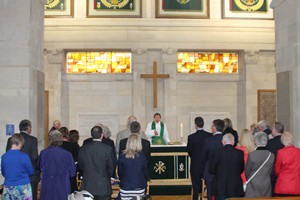 The Service gets underway in the newly re-ordered Regimental Chapel.

Lt Col Linford said: “This is the spiritual home of the Regiment. The new lighting really brings the Chapel alive, and anything that enhances its place in the Cathedral is to be applauded.”

Lt Col Twigg said the Chapel contained many important historical artefacts including Books of Remembrance, the font, lectern, and chairs presented by families in remembrance of soldiers who had lost their lives. 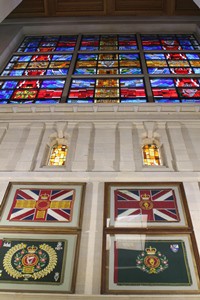 Among the Colours laid up in the Chapel are the last stands of Colours presented to 1st Bn Royal Inniskilling Fusiliers by HRH the Duke of Gloucester in Kenya in 1962 and 1st Bn The Royal Irish Fusiliers by Field Marshal Sir Gerald Templer in Germany in 1963.

One of the most important artefacts is a Book of Prayers written on rice-paper by a prisoner of war in Korea and presented to Capt James Majury, a gift from the prisoners who had found comfort in the services he had held for them during their captivity in 1952-53.

It was this same James Majury who in 1976, as Major General and Colonel of The Royal Irish Rangers, set in motion plans to establish a Regimental Chapel in Belfast, a Chapel in St Anne’s which continues to remember those who served in the past and continue to serve today.