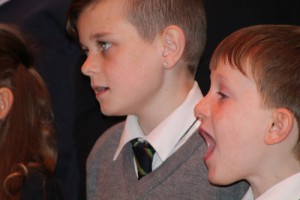 Her Majesty’s Lord Lieutenant for Belfast has said there is no other project in Belfast as important at St Anne’s Cathedral’s Choir School.

Mrs Fionnuala Jay-O’Boyle was speaking at an end of term concert staged by the children of the Cathedral’s Choir Schools on Sunday June 7. Photo album

Mrs O’Boyle, who as special guest handed out certificates to the children, each class, and members of the Girls’ Choir, said the singing at the concert had been ‘fantastic.’ 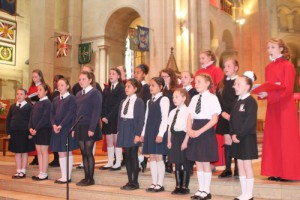 Girls singing during the concert in St Anne’s.

“There is no more important project in Belfast than this project of music, of allowing these wonderful young voices to be heard,” Mrs O’Boyle said, adding that she couldn’t wait until next year’s concert.

The children of certainly did themselves and St Anne’s proud. Some 100 pupils from Edenbrooke, Cliftonville Integrated and Sacred Heart primary schools sang their hearts out in front of family and friends.

The singers included members of the Cathedral Boys’ and Junior Girls’ Choirs, and the fabulous St Anne’s Senior Girls’ Choir was on hand to support the little ones and make their own contribution to this fantastic show. 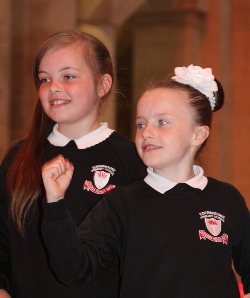 Guided by the Cathedral’s hugely talented musicians and their assistants, the children sang a range of songs from the shows and pieces which they have been working on all year, singing in beautiful harmony.

Items in the programme included Consider Yourself, and Food, Glorious Food from Oliver by Lionel Bart; I Closed my Eyes fromJoseph and his Amazing Technicolour Dreamcoat by Andrew Lloyd Webber; and Grandfather Clock by Dunhill.

The children are all taught in school by singing teachers from St Anne’s Music Department – Catherine Harper, Thérèse Woodfield and Master of the Choristers David Stevens.

As well as teaching the children to sing choral music in a disciplined but fun manner, the project has enabled the Cathedral to recruit singers for its Boys’ and Junior Girls’ choirs. These children are transported by minibus from school to sing in the Cathedral itself.

The Concert was an opportunity for family and friends to see just how much the children have achieved over the past year.

Guests and children were welcomed by the Dean, the Very Rev John Mann, who paid tribute to children and staff for the hard work they had put in to preparing for the concert.

At the end of the concert, the children and their families enjoyed refreshments put on by members of the Cathedral community.

Videos of the concert can be seen on the Belfast Cathedral Facebook page.