Andrew helps rebuild lives after being caught in Nepal earthquake 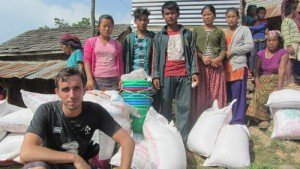 Andrew Bovill with local people who received aid from his team who travelled out to remote villages hit by the Nepal earthquake.

When Andrew Bovill found himself caught up in the horror of the Nepal earthquake in April, he didn’t jump onto the first plane out of there.

Instead Andrew, a parishioner at Drummaul, Duneane and Ballyscullion, extended his stay to help relief efforts in remote villages in some of the worst hit areas. See our photo album at the bottom of this page.

When family, friends and parishioners at home heard what the 28-year-old was doing, they organised a fundraising venture and sent £5,000 out to Nepal within days of the quake.

Travelling home from Australia where he had been working for three years, civil engineer Andrew had stopped in Nepal to do a once in a lifetime trek to Annapurna Base Camp in the Himalayas.

After the trek, Andrew was relaxing in Nepal’s second biggest city, Pokhara.  “I was walking up the middle of the street on Saturday April 25 when the earthquake struck, followed by several aftershocks,” Andrew said. “Although it was a surreal and frightening experience Pokhara sustained only minimal damage such as cracks in buildings, for this reason we underestimated the scale of this disaster at first.”

Although the epicenter of the earthquake was midway between Pokhara and the capital Kathmandu, it soon became apparent that parts of the country had not fared so well as Pokhara had. 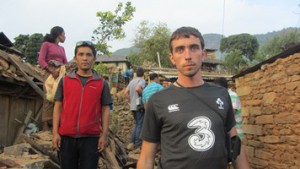 Andrew in one of the villages badly damaged in the earthquake.

“After seeing the media coverage it became clear that this was a tragedy of a huge scale that was yet to be realized,” Andrew said. “The next couple of days were spent sitting in safe spots waiting for aftershocks.  Once the aftershocks subsided you could see the change in attitude in the town, it was clear that people now felt safe and wanted to now do something to help those worse affected.”

Andrew said the British Embassy was offering free flights home, but he felt Pokhara was the best place to be.

“I was in a restaurant when four Nepali guys sat beside me and started to talk about how they were gathering funds to buy supplies and get them to the badly affected Gorkha district,” Andrew recalled.  “I felt I could trust these people so I gave them some cash. They were shocked and very thankful.

“They invited me to sit with them and after an evening of chatting they welcomed me into their group.  We organised to meet up the following day to buy some supplies.”

The group was made up of young businessmen. Taking the lead was Surendra, the Chief Executive of a local charity.

This was to be the start of a partnership that would link not only Andrew and his new friends, but link Pokhara and the people of Nepal with the parishes of Drummaul, Duneane and Ballyscullion.

“The next day my new friend Gaurab collected me on his motorbike and took me to his home where I was given a bed to sleep in and food to eat for the next three weeks,” Andrew said.

“The first few days the guys were communicating with the badly hit areas to find out what supplies were needed and where.  We bought food, tents, blankets, bedding and medical supplies.”

The first area the group visited was Gorkha. “This district had been receiving no assistance or media coverage and access was very difficult due to the terrain and landslides,” Andrew said. “One village had 1200 houses and now has four.” 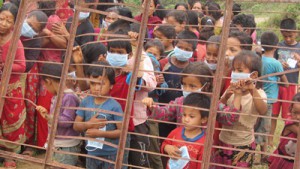 Children wait patiently for aid and medication in one of the Nepal villages Andrew’s group helped with donations from his parish at home.

“We arrived just a week after the quake and the situation was very bad. We met old ladies begging us to help out. Many people were wearing white robes, a sign that they were in mourning.  We walked round to see what we could do, and camped overnight. It got very cold. The people had no beds, they were sleeping on damp floors and this was leading to flu and diarrhea.”

Because Andrew did not speak the language, he felt he was not able to help much on the day the team was buying supplies to take to Gorkha.

“I basically carried a few bags of rice and blankets from place to place which any of the guys could have done.  I felt a bit of a spare piece.  What the guys really needed was funding, I realized that I could possibly be the middle man and get funds to these great people.

“Millions of dollars in aid had been donated to Kathmandu and still people had no food, water or temporary shelter.  With corruption in government and a lack of communication and strategy it felt that the relief effort was being ineffective.

“This local team communicated with affected communities to find out what was needed and where.  They then bought supplies that were in demand and planned to distribute it to where it was needed most. It was clear that this action was totally transparent and efficient.  It felt important to get the funds to teams like this who were making a real difference, for both the victims and the donor’s sake.”

Andrew created a Facebook page called ‘Earthquake Nepal Direct Action,’ and brought this to the attention of people at home. Among the responses was the fundraiser at his parish church.  It raised £5,000.

“This event which was totally down to my family and church members speaks volumes for the great little communities we have in our country,” Andrew said.

The money was transferred directly to Andrew and the team in Pakhora. After receiving so much financial support Andrew felt it was important to stay on in Nepal to see exactly where the money went.

“After communication with different affected areas, the guys decided that the place in most need of aid at the time was Dhading.  The Dhading district is about 30km west of Kathmandu and contains many villages that have been badly hit by the earthquake.

The donations from Co Antrim initially paid for:

This aid was transported by truck and personally distributed to those who needed it most. It will help hundreds of families survive the upcoming monsoon season.

The team did encounter problems. They were prevented from going into one remote village in the Dhading area by a group of men who effectively hijacked them, demanding they offload the aid there and then. Representatives of the local Lions’ Club had travelled with the team, and helped in the discussions, which Andrew said did become heated.

“In the end we had to turn back and that village missed out. If we had carried on and left the aid in the village it may have been dangerous for the local people as this gang of men may have raided the village,” he said.

“I felt safe, even during the arguments, because there were so many of us, but it was a pretty hostile situation.”

After Dhading the team travelled to Lamjung, a village close to Pokhara. Here the people had requested corrugated sheets for reroofing damaged homes and rebuilding after the monsoon.

“The village was very remote, and when I arrived it felt like I had travelled back in time. The people were very poor, they had no modern appliances, yet they were so hospitable, offering us a meal of buffalo meat and buffalo milk.”

Delicate negotiations with the leaders of the village followed so that each family got exactly what they needed.

But despite some tense situations, Andrew said much of what the team was doing proved to be fun. “It was difficult to know what attitude to take,” he said. “We were walking round people’s ruined houses. They had lost so much. On the first trip I was very serious but after that I tried to be happy and give them some positive energy.”

After a total of six weeks in Nepal, Andrew returned home to a warm welcome from his parents Jean Bovill, the parish organist, James Bovill and the rest of his family and friends.

His Facebook page continues to highlight the plight of the earthquake victims and the work his friends are doing to help them rebuild their lives.

At the 10am service in Duneane on June 6, Andrew told the story of his time in Nepal and how the money donated in his home parish was helping the people of Nepal.