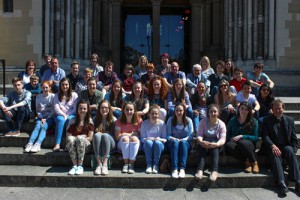 The Connor Streetreach team after it was commissioned by Dean John Mann, front right.

The Diocese of Connor Streetreach team was commissioned in St Anne’s Cathedral on Saturday June 20 in preparation for its outreach in north Belfast at the beginning of July.

Around 40 young people will spend three days in the Glencairn and Whiterock areas, delivering a wide variety of activities and connecting with people of all ages. Activities will include gardening, street cleaning, a community carnival, Victorian tea for the elderly and a community barbecue.

Zara Genoe and Sharon Hamill, co-chairs of Engage Connor Youth, the youth council for the diocese, said: “Ultimately this opportunity seeks to bring God’s love and share his joy on the streets of north Belfast.” 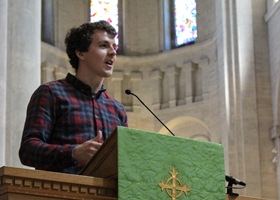 Connor Pioneer Evangelist Stephen Whitten spoke during the Day of Prayer in St Anne’s Cathedral, when the Streetreach team was commissioned.

The Streetreach committee is very grateful to the staff team based in Glencairn and Whiterock for its direction and support.

“The Streetreach team is excited and encouraged as the City Council and community groups in both areas embrace this community missional experience. There is great excitement as Streetreach supports the vision and ministry of two local churches,” said Sharon and Zara.

“This is the first of many Streetreach opportunities, engaging young people in mission. We look forward to 2016 and the possibilities of another parish willing to engage in mission.”

The team was commissioned during a Day of Prayer the renewal and revival of the faith in this land organised by Divine Healing Ministries.

The day completed six years of a seven-year cycle of prayer, and the theme this year was ‘Healing through Forgiveness.’  There was a range of speakers for each half hour, and two hours were led by young people including representatives of Connor Youth Council, Stephen Whitten, Pioneer Evangelist in north Belfast, and Lucy Burden, Lisburn Cathedral. 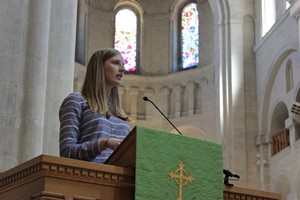 Lucy Burden from Lisburn Cathedral speaking at the Day of Prayer in St Anne’s Cathedral.

Streetreach runs from June 30-July 3. Each day, the young people will be transported to Glencairn and brought back to their base at Queen’s University in St Anne’s Cathedral’s choir minibuses. The Dean of Belfast, the Very Rev John Mann, who commissioned the Streetreach team, said: “They have agreed that they should be expected to sing on the buses both ways!!”

At the commissioning the Dean left them with the thought that together in Christ they should aim to “live the present moment with those you love, and love those with whom you share the moment.”

Streetreach is an initiative generated from Summer Madness, the long established Christian youth festival that takes place at the beginning of July every year.  In recent years it moved from the King’s Hall to Glenarm.

When Streetreach ends on Friday July 3 the young people will be transported in the St Anne’s Choir minibuses to Glenarm, taking with them the experience of their days of mission in Glencairn.