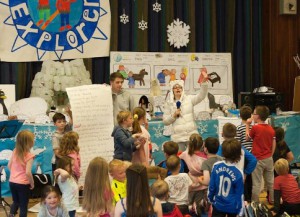 Fun in the ice!!!! at the Polar Explorers Scripture Union Club in St Patrick’s, Ballymena.

With the help of two characters – Sir Random Finds and Bare Feet – the children were explorers sent on a mini-expedition each evening to learn about a New Testament character. Through the lives of these people, they learnt that no one is excluded from being part of God’s big expedition – that is, to be a friend of Jesus and go out and help other people be friends of Jesus too. 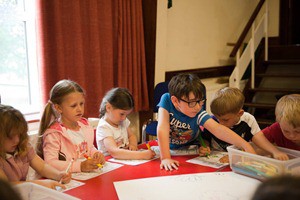 Young explorers on a learning expedition in Ballymena.

The halls at St Patrick’s were decorated with some fantastic arts and crafts, including posters and an enormous milk carton igloo! The programme included songs, games, art and crafts, storytelling, puppets and much more.

On Saturday evening, there was a Family Fun night with bouncy castles, face painting, jumping clay, tattoos, chocolate fountain and a BBQ! There was a fantastic turn out and everyone had a whale of a time!

The Sunday morning children’s prize giving service was the culmination of the week’s events. The church was decorated with the Polar Explorers artwork and the children participated fully throughout the service, singing, playing instruments, leading the prayers and taking up the collection. 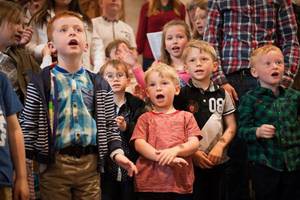 Singing at the special Children’s Day church service on June 20 when prizes were awarded.

Special guest was Connor Children’s Project Development Officer Jill Hamilton. There were prizes for all the children and cups for some who had shown great faithfulness and enthusiasm throughout the year. The church was packed with some very proud parents and grandparents!

Children’s and youth work at St Patrick’s is led by Lucy McLoughlan and Alan Ross. The rector, the Rev Canon Stuart Lloyd, thanked them and all their volunteers for the huge amount of work they had put into the week.