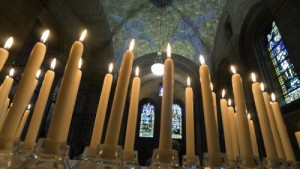 Candles burn in St Anne’s Cathedral on July 3 for the victims of the Tunisia shooting. Photo: Pacemaker

Silent prayers were said in St Anne’s Cathedral for the victims of the Tunisia beach attack – exactly a week after 38 people, including British and Irish holidaymakers, lost their lives.

Candles were lit inside the Chapel of the Holy Spirit at noon on Friday July 3 and the names and photographs of the 30 British and three Irish victims were on display as they were each remembered.

The vigil provided an opportunity for people from across Belfast and beyond to come and pray in silence for those killed when a gunman began killing indiscriminately on the beach in Sousse. Prayers were also said for their families and for those who were injured.

The period of prayer in St Anne’s coincided with a nationwide minute’s silence for the victims.