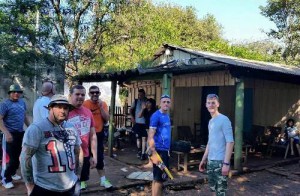 Flute Band Church members hard at work fixing up a house that doubles as a church in Concepción, Paraguay.

Led by the Rev William Orr, rector of Muckamore, Killead and Gartree, the group left Dublin on July 16, travelling to Paraguay via New York and Brazil. After their flights, the group had a six hour bus ride to reach Concepción, their base for the next couple of weeks. 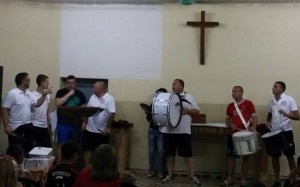 The Flute Band Church members provide music in Church on the team’s first Sunday in Paraguay.

They spent their first day, Saturday July 18, clearing and doing repair work on a house that doubles as a church on Sundays. They took part in a parade, and Saturday evening ended in the church for a short service attended by 38 children.

The musicians played again – the team comprises both flautists and drummers – and the children were told the story of the Prodigal Son. 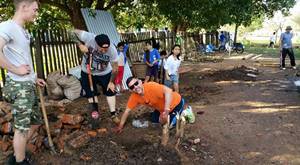 Getting stuck into work on Satruday, their first day in Concepción.

Band members were back in action again in Church on Sunday morning – with video evidence of the energy and enthusiasm they put into their playing available on Facebook! – and afterwards they enjoyed football with local teenagers.

William has been rector of Muckamore, Killead and Gartree since 2007. A survey carried out by Muckamore Parish Development Association found that the estates which constitute the parish were 93 per cent Protestant, with less than 10 per cent of people practicing their faith in local churches. 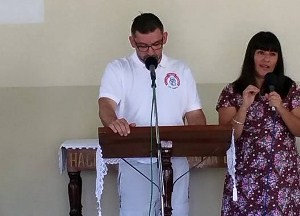 “When I came here my prayer was ‘what’s culturally relevant, what is the most important thing to people living here?’ There was my starting point,” William said.

This prompted William, who had been a proud member of a flute band in his native Rathfriland before entering the ministry, to establish Flute Band Church. The band plays hymns, many in a blood and thunder style common to flute bands, in church and at other events.

The Flute Band Church Paraguay team was commissioned by Bishop Ken Clarke, mission director SAMS, at a service in Muckamore on July 5. 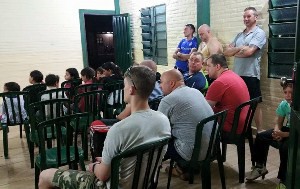 The team in church on Saturday night at a short service attended by 38 children.